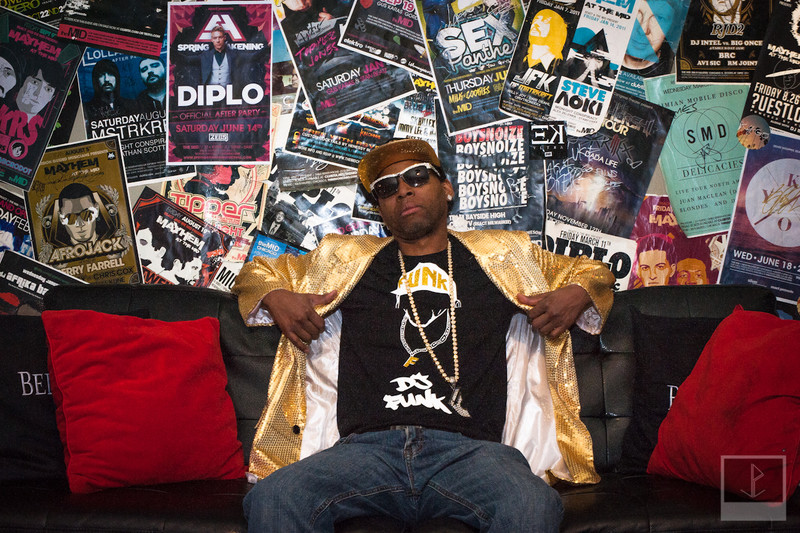 Chicago's Charles Chambers is one of dance music's enduring cult heroes. Operating under the no-nonsense moniker of DJ Funk for over 20 years now, his infectiously unsnobbish approach to igniting a party is energetic, frenetic, and filthy; the productions strewn across his legendary Booty House Anthems series tend to have names - Pop That Pussy, I Need Weed In My Life, Ass & Them Titties, etc - that would make your parents' eyes roll (which is entirely the point).

Sweaty, raunchy, high-octane energy is the lifeblood of a DJ Funk set, and it continues to see him as likely to be booked by a tastemaker promoter as he is to collaborate with a globally-renowned EDM star. One such booking is an appearance at this year's edition of Simple Things, the annual pan-Bristol festival organised by the minds behind Crack magazine. DJ Funk plays on the festival's main day of Saturday 24th October, which also sees Skepta and JME, Battles, Savages, Beak>, Factory Floor, Dean Blunt, Hunee, Galcher Lustwerk and many more live acts and DJs take to various stages across the city. There's also the enticing prospect of an opening concert from Godspeed You! Black Emperor the night before, on Friday 23rd October.

Ahead of his set at the festival - which will combine DJing with live 808 and 303 performance - we caught up with the Dance Mania maverick over email...

It’s been about 7 or 8 months since you last played in the UK, what have you been up to since we last saw you?

Us Brits are a stereotypically reserved bunch, and in the past I’ve read various complaints about how no-one dances properly at parties here - how do you find the energy of a crowd in the UK compared to other places you’ve played? Where in the world do you find delivers the best atmosphere?

It depends where you are…. DJ Funk ALWAYS gets the party jumpin!

You released Booty House Anthems 3 in 2013, 14 years after the first volume came out - what do you think it is that makes ghetto house / booty house continue to be so popular?

Because it's original underground Chicago sound where house music was invented, the lyrics are from a young person's perspective and politically incorrect music that's not mainstream. That's why a lot of people love it, because it's rare and special.

The sound is really the same, everyone who does booty music knows where it stemmed from. People love it all around the world, I'm touring and DJing more now then ever, I've had a few chances to go pop genre, but what I learned is if you keep control of your own music and keep it underground  you don't have to worry about being a one hit wonder and falling off.

There seems to be a lot of the old Chicago and Dance Mania sound filtering through into tracks these days, people reusing some of your samples etc - how does it feel to be influencing a new wave of producers? Is there any new stuff that’s particularly caught your attention?

Well I'm glad you asked me! I have a new record coming out with Tommy Sunshine and Chocolate Puma on Oliver Heldon's new label Heldeep Records called Scrub the Ground - it's a number 1 original DJ Funk sample. We call the style "bass house". It's the new ghetto sound so now that got everyone's attention!!!!!

How do you feel current mainstream EDM in America relates to the dance scene when you were first starting out?

It's cool, but a lil too pop for me. It's just a new Chicago house sound. Each new dance style that emerges only lasts for 5 years or so, that's why I stick to my roots, my style that I helped pioneer - the Chi-town vibe. It's all around the world now and DJs and producers will be check'n out where the original sound came from, and they will be doing their "homework" like Daft Punk - remember, I'm one of the teachers!

There seems to be a lack of prominent black faces in the EDM bubble right now, especially considering how many key underground producers and DJs are black?

That's so funny I was thinking the same thing, but a lot of the original DJs did not have the right contract, managers, lawyers, record company etc. And they were not able to make it in this white man world!!! You have to be very smart on your business to make it, not just talent.

For your upcoming tour it says you’ll be DJing along with live 303 and 808 - how did you decide to add the live elements to your sets?

Because party people love it and most DJs /producers can play live, mix and MC at the same time. I'm also taking it to another level, by freestyling live vs using computer mixing programs.. anyone can DJ now so I have to throw down and do something that's special and different.

Do you find there’s a different reaction from the crowd from DJing vs playing live in a club?

People like the live set a little more sometimes because I'm making it up on the spot - it new and nobody ever heard it before, it's rare and unique.

How’s your involvement with Dance Mania at the moment? Anything we should be looking out for from the label coming up?

I still own part of Dance Mania - we're going to put the DJ Funk Gold Album on vinyl and cut some of the prices down for the Hit It From The Back tour. Working on a Booty House Anthems 4.

Finally, which of your own tracks, and which tracks by other people, do you find always go off when you play them out?

For the full Simple Things line-up and tickets, head over to their site.