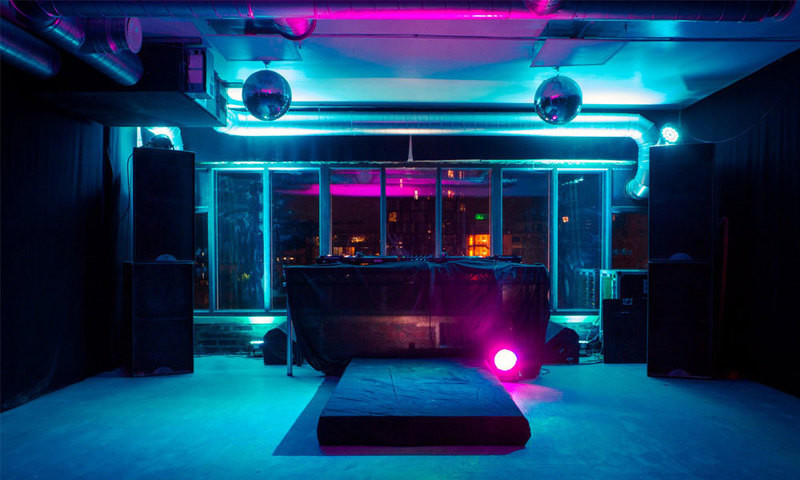 After lying closed for some time, Bal Fashions relaunched this summer gone with a string of parties — the team inviting the likes of Force Majeure, Apricot Ballroom and Moment Cinetique to do their thing in the revamped space. Now, the venue’s Bally Johal and DJ/Producer duo PBR Streetgang (aka Tom Thorpe and Bonar Bradberry) have joined forces to kickstart the venue’s flagship in-house club night — Yorkshire’s Professional Disco. We sat down with Tom to talk about the new club night, inspirations, future plans and Bal Fashions’ place in a rapidly-changing Castlegate.

First things first, who and what is Yorkshire’s Professional Disco?

We’re kickstarting on the 26th with Maurice Fulton, who we feel it’s the perfect guest. Personally he’s one of my favourite DJ and producers — and being Sheffield based, he felt like the perfect choice.

The name came about when Bally and myself, were standing outside the venue, we noticed on the shutters the faint outline of what we thought said Yorkshire’s Professional Disco, though in actual fact it said Yorkshire’s Professional Discount Jewellery Store in reference to what was in the space before; even before it was Bal Fashions & Knitwear — which incidentally is where the name Bal Fashions Social came from - not Bal’s name! We had a massive laugh about it, and then thought it would actually be a really great name for a night, so the writing was on the wall quite literally.

Are there any existing nights you’ve looked to, either in Sheffield or further afield, as inspiration for this new night?

In terms of inspiration, Bonar and myself always reference the ‘Electric Chair’, a monthly party that used to take place the Music Box in Manchester. ‘A red light and a feeling’ was their motto. The vibe at that party was like nothing else I’d been to before! It was curated by the Unabombers. Luke one half of the duo is the man behind the massive ‘Homobloc’ party thats happening in November in Manchester.

Also many moons ago there was a great party in Sheffield, called ‘Jigsaw’, and I’d like to think we’re giving a nod to that as well.

We want it to be a bit of an “anything goes”, fun and inclusive kind of party, we’re speaking to some friends who have Drag acts and performers. We often refer back to a night called ‘Vague’ in Leeds which was a predominately gay party but you could go in if you were accompanied by a member — it was a bloody great night. And I think with such a big LGBTQ community in Sheffield, we want to create a space that is totally safe for everyone, where everyone can mix and be on the same level. That harks back to the original ethos of 70’s New York club culture — the likes of the ‘Loft’ and  ‘Paradise Garage’ etc.

Great first booking in Maurice Fulton, can we expect more of the same with guests to come or are you keeping it fairly open in the types of sounds you’ll be pushing?

Thanks. The night will evolve over time, but there will be a disco theme running through it. We’ve got Ruff Dug and Donald Dust lined up for the next one in November. Bradley Zero is also coming to play but we’re just working out what brand that will be under. We’re just interested in pushing cutting-edge underground music really.

Do you think the old-school disco and house approach is lacking somewhat in Sheffield at the moment?

In terms of what’s happening in Sheffield, I’m still understanding the scene, I used to come down here a lot around 25 years ago, and there was a huge club scene at that point, 4,5,6 venues that were full on the weekend. That seemed to fall apart a bit for whatever reason.

But I’ve noticed there’s some really interesting parties, events, promoters and DJs, the scene seems to be growing again. Sheffield’s got a rich heritage with electronic dance music, from WARP to bassline and more, and it feels like there are lots of nice pockets of music within the city again. The ‘Apricot Ballroom’ guys are a good example of the fresh new bread trying to push boundaries.

Read: Sounds Like This celebrate 12 years on the airwaves with a Bal Fashions party

You’re all promoters in your own right and have been heavily involved in music for a number of years - how does Yorkshire Professional Disco bring these varying strands together?

I think the planets are aligned to bring all our knowledge together on a project — I want YPD to be exactly that! Myself and Bonar have been doing PBR Streetgang for a while now, and before that I was a promoter. Bally’s route was also heavily promoter-based, he started off curating events and brands in different in Leeds and Sheffield, ‘Bed’ being one of them. I feel we can bring all that wealth of knowledge together to create something pretty special!

I also want to create a party where Bonar and myself can express ourselves, get to play those weird and wonderful rare record. That’s the dream for most (good underground) DJ’s, and that can only really be done through playing a regular event, a residency. We’re from Leeds and we’ve got a healthy reputation there, so I’m looking forward to doing something regularly down here in Sheffield.

Bal Fashions has, owing in part to it to its location I guess, always seemed understated and laidback. How do you see the space and location of Bal Fashions informing the vibe of Yorkshire's Professional Disco?

I mean Bal Fashions has always been underground, Bally used to refer to it as a speakeasy, which I think is a good and fair description. I like venues that are off the beaten track, BF is a total destination place, in a raw and gritty location. There’s also Plot 22 and Delicious Clam but they’re different musically, so we are out on a bit of a limb but I think that makes it exciting.

Bally has a real connection with the area, through the venue and his vintage Thrifty store, so he’s very aware of the people, the place, and vibe of the area. There is going to be a lot of change coming up, the landscape is probably going to be different in 12-18 months time. Exchange St. will be right in the centre of all that change, we might end up being right in the thick of it!

Quite a few of Sheffield’s DIY venues have closed recently due to a combination of noise complaints and landlord issues, what are your views on this?

We’ve been very lucky so far, the landlord (CADS) seem happy to let us get on with everything down there. The sound issue is an interesting one to mention, Sheffield Council have been very supportive. Helping towards sound installation work through a grant scheme, which we’re really grateful for. When you have the Council genuinely wanting to help, it’s hugely reassuring for us and the venue.

I feel it’s down to us and the rest of the small businesses in the area to keep up the momentum to ensure the area grows and develops in the best possible way. You could compare the area to what Shoreditch was like 20 years ago…  raw, edgy, then going through rapid change, where some of the key cultural spots managed to keep their original philosophy and identity. Let’s just say Castlegate is a very exciting place to be right now!

Read: Sheffield's Bal Fashions to be re-launched this weekend

Can you give us any details of what’s coming in the future?

In general, the idea is to bring people from out of town to ‘YPD’ and to the venue. We’ve got pockets of friends all around, Leeds, Manchester, and further afield, so we want to try to bring people from out of town to the city. That’s quite a big thing for us. Sheffield can be a little overshadowed by the likes of Manchester & Leeds, so I think bringing people into the city for the weekend, to check it out, stay overnight, spend some money, is a really positive thing.

Any tracks that give a good indication of YPD’s music policy?

I’m just hoping Maurice will drop this nugget!! I think it sums up ‘YPD’s’ musical approach perfectly… a little bit disco, and a little bit wonky!

Tickets now available on Party For The People