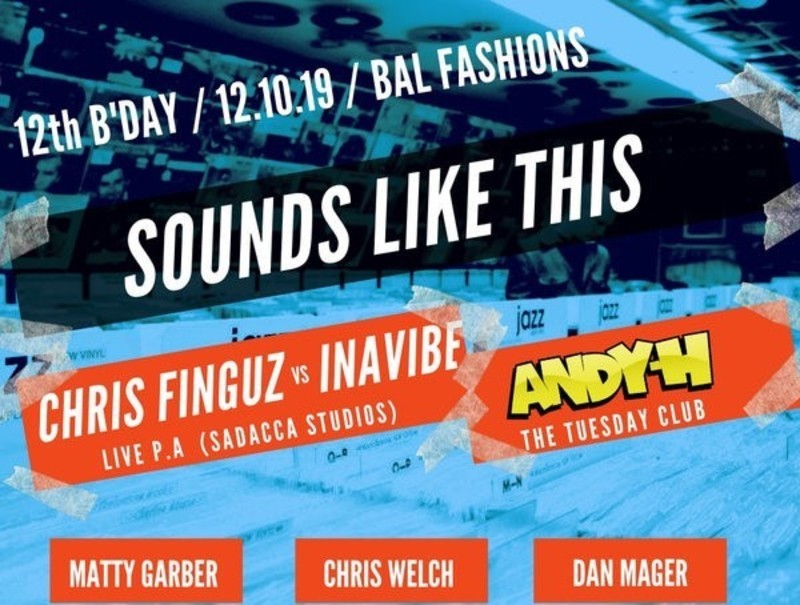 Jazz, soul & breakbeat specialists, Sounds Like This Radio celebrate 12 years of broadcasting this Saturday with an intimate, one-off party down at Bal Fashions.

Sounds Like This was started back in 2007 by Chris Welch and Danny Mager, soon after Sheffield Live received its FM licence. "Always eclectic in approach", explained Chris, "the show was the perfect place to showcase the styles of music we were into, from hip-hop and soul to jazz via drum'n'bass, house, afrobeat and the odd fierce cumbia".

Despite Danny's departure for others projects — including the Gravel Pit shop on Abbeydale Road —, Chris kept the ship afloat, with a focus on fresh new sounds from the emerging UK jazz scene to soul and broken beats and music from across the world, securing interviews from the likes of Jose James, Omar, Children of Zeus, Rodney P, K.O.G and local heroes such as Winston Hazel and Andy H. "I'm a massive fan of radio and never wanted it to be just a selection of music, like a DJ set" Chris points out."I wanted it reflect the time of day (5-7pm), the season - nice and warm on summer afternoon, moody and reflective on a wet, dark November and it be a conversation".

What's in store for their 12th birthday celebrations at Bal Fashions? A brief excursion from their home at Sheffield Live, the team bring DJ sets from Sheffield don Andy H and their extended radio family, a Live PA from veteran producer and one of Sheffield's unsung music heroes, Chris Finguz (Bare Knuckle Soul), who will be reinterpreting InAvibe's material for the occasion. They will be joined by original partner Danny Mager and Matty Garber, the latter having just returned back to Sheffield from Bogota. A cassette takeover is on the menu in the downstairs bar, with mixtapes ranging from wonky soul to Brazilian leftfield stuff "and maybe some old hardcore or something", where the crowd is invited to get involved and stick the tunes on. "It might be messy and I'm perfectly alright with people nicking the tapes at the end of the night. In fact, I'll be offended if they don't!"

Get into the mood for Saturday with Chris' mini playlist featuring tunes from Moses Boyd, Onipa & more.

Namebrandsound seem to be at the spearhead of a little broken beat revival...well perhaps not a revival as it was never that big anyway but it was a sound that was so ahead of its time and one of the absolute dons over the years (IG Culture) is partly behind this. Killer.

After supporting Quantic about 15 years ago we had a long chat about a shared love of cumbia music which he was really getting into at the time: the bassline, accordion and roots simplicity that just seemed to work so well on UK dancefloors. He went on to make loads of really good cumbia influenced stuff. That Colombian influence has remained in his music and this collaboration with Frente Cumbiero does one of my favourite dancefloor things: starts off slow and gets faster and faster. Love it.

"I'll say it with my chest and I don't care who I offend." She does. Haven't had too much UK hip hop I've wanted to play out but this funk bassline monster is one I've been playing all year.

A lot has been written about UK jazz music over the past few years but there are just so many superb musicians making incredible music. And crowds are loving it. For a long time in the wider dance music scene, bands have been playing 2nd fiddle to DJs. No more! Gimme a jazz moshpit over a DJ set any day and whether it's this, Sons of Kemet, Joe Armon-Jones, Steam Down or whoever -  this is the stuff that is exciting me!

Sheffield and Ghana's K.O.G collaborating with Tom Excell (Nubiyan Twist) on some 135bpm afro-fusion housey dancefloor dynamite. It's that hi-life guitar lick, the energy and the smile it puts on everyone's faces.

You can catch Sound Like This on their normal slot every Sunday 5-7 on Sheffield Live.