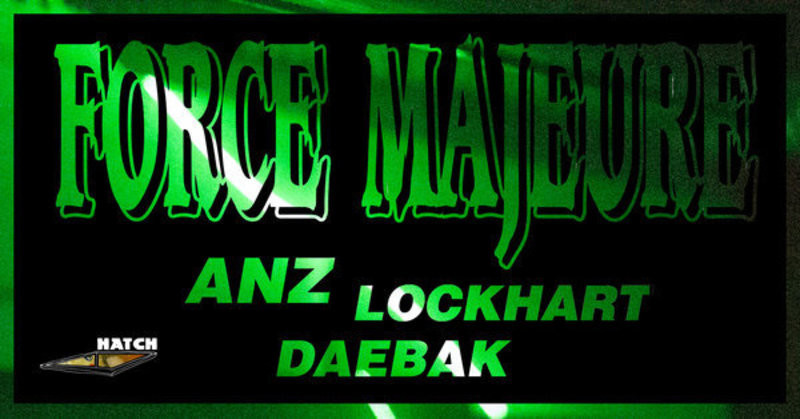 Founded in 2015, FM have spent the past few years carving out a niche for bringing innovative, underground electronic sounds to Sheffield. From booking new school instrumental grime artists like Iglew, E.M.M.A and Tarquin to throwing techno parties with locals Proteus and Cellar Dwellar, FM have really made a name for themselves as vital party starters here, providing a much-needed space for sounds and scenes that aren’t often brought to Sheffield.

Anz has had a mad couple of years since she last played FM back in 2016, and her appearance here comes off the back of a crazy Boiler Room set and new EP on Finn’s 2 B Real. She was accompanied by Lockhart (who can be found playing anything from techno at Corsica Studios’ ‘Jaded’ after parties to hard drum, club + more), Sheffield-based Daebak (of More Pussy 3mpire, who recently played at the Sheffield Red Bull Road Block) and the ever-consistent FM resident Korra.

Daebak opened with a killer warm-up set of dark, percussive club tracks (think Her Records, Night Slugs stylings) as well as some more grime orientated stuff – this Akito remix of Last Japan a personal highlight. A seriously fitting warmup for the DJs ahead, the space filled up with a receptive crowd as Daebak (definitely one to watch) gently built things up and made way for Lockhart.

After a dark, tense intro, Lockhart quickly brought up the pace with some pounding techno. While still hard and punchy, some of the tunes had a bouncy, garage-esque influence in their percussion, really getting the (now nicely busy) crowd moving. Journeying through acid, vocal trance breakdowns and even a version of Eric Prydz’ Call on Me, Lockhart’s brave, versatile and high energy DJing definitely paid off – be sure to catch her play if you get the chance.

Next up was Anz, who seamlessly blended Lockhart’s last techno track into a 4x4 garage tune which quickly got wheeled up. Soon after, she drew for the disco-inspired electro jam ‘No Harm’ off her latest EP, followed by some breaks, bleepy electro and even a couple Channel U grime classics, all incredibly mixed. The club-ready nature of her selection and tactful mixing really tied these genres together in ways only a seriously skilled DJ could.

A comprehensive selection of UK sounds, with some speed garage and even a bit of dubstep towards the end, Anz has really cemented herself as one of the sickest DJs about right now – a real party DJ in the best way possible.

Closing off the night after Anz’s seriously high energy set was Force Majeure resident Korra. A staple from their early grime nights, he’s proved himself a vital member of the FM crew who can always be trusted to take control of a dancefloor and deliver. He came through after Anz with plenty of hard, club-ready trap tunes, expertly mixed and weaving through some techno, maximalist trance influenced stuff, and even a ridiculous blend of the Pokemon Gold OST with a Jook grime instrumental. Kode9’s abrasive remix of The Bug’s ‘Skeng’ followed, and even some DJ Rashad as the tempo pushed 160bpm towards the end. As usual, Korra closed off the night in style.

The venue was fittingly relaxed as ever - the change of hands from Audacious to Hatch clearly hasn’t led to any loss of charm. A BYOB policy, smoky rooms, cheap entry and clean punchy sound provided a great space for the party. The night was musically diverse yet still completely cohesive, with all DJs on top form – Force Majeure delivered once again.

Next up on the 17th May, FM bring London’s Coyote Records to DINA for the launch of Utah’s new EP ‘Bronze’. Check it out here. You can pick up your ticket now via PFTP.