Sheffield clubbing institution The Tuesday Club returns for its new season in September, with 14 gigs scheduled between freshers week and the Christmas break. Offering fresh-faced students a great first taste of the city’s scene, the long-running club night also regularly attracts non-students and seasoned ravers with its varied programming.

This season starts on the 24th of September, with legendary London producer DJ Zinc going B2B with bass music contemporary, Redlight. With both artists’ tastes and focuses continually evolving - expect a varied set spanning the breadth of the UK club tradition, with nods to house, D&B, jungle and breakbeat. The remaining lineup looks strong, with Sherelle in particular one to try catch; her high-energy brand of footwork, jungle and D&B has catapulted her into the spotlight. Just look at this much-hyped Boiler Room set from earlier this year for a taste of her raucous style.

Across the rest of the season the sounds on show are as varied as ever, with some nights geared more to the house and techno heads; artists such as Artwork, Kettama and PPG’s Stevie Cox are all set to make appearances. Glasgow wonder kid Denis Sulta, known for his sophisticated, synth-driven productions, plays in October as part of a joint night put on with The Night Kitchen.

Elsewhere reggae and dub dons Mungo’s Hi Fi pass through in November, whilst rounding off the season in December are boogie and disco aficionados Raw Silk and Horse Meat Disco, with support from Dan J and Leroy.

Full listings are below.

You can buy tickets for the TTC -TNK night on 1st October, here. 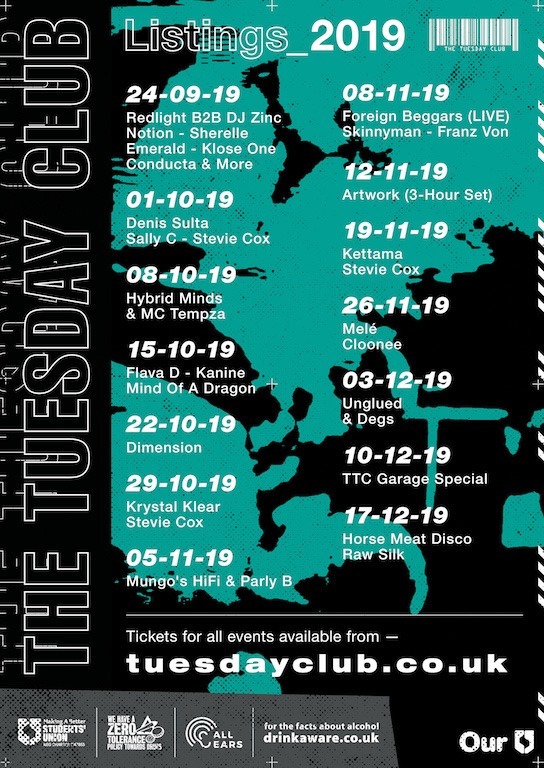