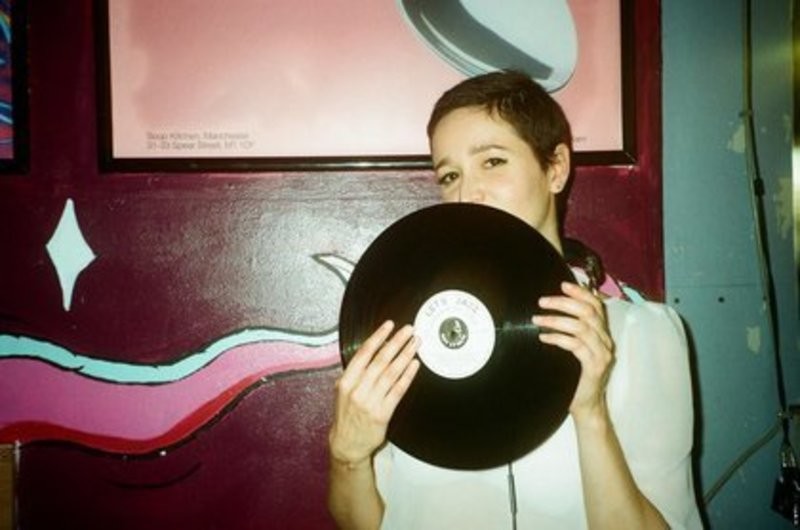 A resident of NTS Manchester as well as at Salford DIY venue The White Hotel, Annabel Fraser is a truly eclectic, vinyl-only selector whose dedication to the craft and exploration of diverse music is unwavering. Ahead of her appearance at Bal Fashions on the 13th March, where she plays the fourth edition of the venue’s All Night Long series, we talked to the DJ about her career so far, the Manchester scene, preparing for sets and her forays into the world of production.

For those new to you, can you give us a rundown of your story as a DJ so far?

I bought my decks about 21 or 22 years ago - my Technics 1210s which I still have to this day. About a year after getting the decks, I was persuaded to record a mix for a local night - Reckless - run by Lee Fredericks. He was doing a very different thing with the night, playing loads of funk, soul, boogie disco, hip hop breaks kind of stuff, along with two other residents. It was something new and fresh for Stoke. I don’t really know why they asked me specifically. There weren’t many women DJing, especially not with an eclectic approach.

There was definitely a bit of a novelty factor added to it, which probably opened the doors for me more than it would for a load of lads in Stoke at that time. That’s how it was right then. I felt there were people who were better qualified than me, and that was always on my shoulders a bit. But I really wanted to play records so I took advantage of the opportunity. I played for them [Reckless] for about a year and a half, it was an invaluable experience.

After that there was a lot of pressure on me to push the whole female thing to be honest, I was asked to provide a photograph for certain gigs and stuff, which I flat-out refused to do, obviously. So I started to do my own parties in Stoke, I did them as an invitation-only sort of thing because it only takes one sort of idiot to walk in and ruin the vibe for people. So I thought let’s just keep it to our friends and their friends, everyone is responsible for each other and we can do it at some private venue and we can just enjoy the music and have a really nice time.

In Stoke, my friend Leslie had a basement in the corner of a terraced house, in a really residential area, and we soundproofed it. She let us do parties there. We would have to trust in our friends to know that they wouldn't invite anybody that didn't know the score. So it was a very homely vibe and because of that, it was a very unique party. It did feel like home, and I don’t think there has been anywhere since then where I’ve been able to play records from Friday night to Sunday evening. We invited DJs like Calvin Andrews, Balearic Mike to play down there. When that space closed I moved to Manchester.

How did you get started up there?

When I first moved there, I did a few parties in the Soup Kitchen basement, with Maurice Fulton, I invited Young Marco, that was back in 2013 I think. But it felt strange doing parties in Manchester. The reason I did parties in Stoke was because we didn’t have anything else going on - but with Manchester, it didn’t feel like it was needed as much, because other people were doing such great things. So I started to just focus more on DJing. My big break came with NTS, which gave me an international platform to play my obscure, weirdo music.

How has Manchester’s club landscape changed during your time there?

Soon after I got here, the Music Box, which housed the Electric Chair night, had closed and became a Tesco. Wet Play were doing amazing things. There was Cut Loose. But there was a gap with the larger basement parties. Soup Kitchen was just finding its feet - it was initially booked by Sam Lewis, who did a great job. Then it was taken over by Dan Hampson - he really does deserve a big shout out because he took Soup Kitchen in another direction completely, he had taste and his booking skills were impeccable. He understood that it was important to support local DJs, he pushed all the Soup Kitchen residents. I think he had a vision that not many other people had at the time - he was a massive asset to the club and the Manchester and north-west scene.

A key change is Hidden popped up, I was a resident there for 18 months and I had a really amazing time. I just felt it was time to move on and try and tap into the slightly more experimental side of things really. When you’re balancing a club with a business it’s very difficult to push those boundaries, and I totally respect that.

Could you tell us a bit about your current residency at The White Hotel?

I have to say I’m a very tiny part of The White Hotel, there are lots of other people playing regularly, putting on parties and holding the fort really, more so than I am. So I don’t want to claim any sort of glory about that, but it does give me an element of freedom to be able to do stuff that I’ve always dreamed of. For example, playing for Making Faces, playing for Songs Of Frase, which was a Sunday party where I ended up playing for 12 hours - where else can you play for 12 hours? From classical music to techno it’s just fucking great, I’ve never come across a venue that is this free.

I cherish it dearly, and it’s not going to last forever but it’s always going to go down as a part of history, the whole venue and the people behind it and the integrity and the sort of the anti-club and music industry approach to things - it's just a vibe. And it's so needed in this climate. So yeah, I'm a very small part of that I don't even really like saying I'm a resident because it’s just a collaboration of so many people.

You’ve spoken before about dabbling in production in addition to DJing - have there been any new developments for you with this side of things?

I’ve done about an album’s worth of music, but I’m pretty shy about it all. I think when you make music you’re really baring your whole soul for everyone to look at, and judge and criticise. I’m pretty strong-willed but I’ve always got this thing in my head that it’s not quite good enough. I don’t think I’ve spent enough time on it recently to have fine tuned it enough for it to be released. But going through the process has been very wholesome and educating personally. So I’m not putting too much pressure on myself to release stuff, I think I’ll just know when I’m ready. Bear in mind I was pretty shy about being a DJ for about 21 years so it might take another 20 odd years for me to release something. Put it out when I’m dead, when I can’t see it or hear it again (laughter).

How do you prepare for a set?

Well, depending on the gig, and I'm glad I don't get like two gigs a weekend anymore, because I can really think about a gig. I really think about the people who've played there before, what vibe may have worked for them. If I’ve not been to the venue itself, I’ll look at photos of the space and I’ll visualise what could work in that space. I think about these gigs for weeks in advance - it is an obsession.

If I’m playing all night, as I am at Bal Fashions, I'll think about the stuff that I can get away with playing early doors - because that is freedom that you should never take for granted. The end of night is generally guaranteed freedom, you've got that leeway. It’s nice to be able to play records that would not normally get played in clubs.

It’s about emotionally connecting the dots, not necessarily beat matching everything. I’m at a point now with DJing where I have full confidence in what I’m doing - so I’ll make sure that I pack records for every scenario, just in case the room empties, and I need to build it back up again. Or it’s not as busy in the middle of the night as I’d expect it to be, so maybe the tougher records that I’d brought along aren’t so suitable. So I make sure that I have back-up records for every situation.

That’s why I end up taking so many records to every gig - which I’m notorious for. This way I can just think on my feet and that’s when I play best. I don’t plan anything, I don’t plan anything for my radio shows or my gigs. I just take a load of records that I think could work, possibly, for the room that I’ve seen or heard about, and see how that goes really. And it generally works out ok.

I’ll be doing a lot of parties with Making Faces at The White Hotel, also I’ll be doing more Songs of Frase, the Sunday party where I play all night.

You can catch Annabel Fraser play for 6 hours straight at Bal Fashions on the 13th March. Keep up to date with all the DJ’s coming and goings by following her artist page here.