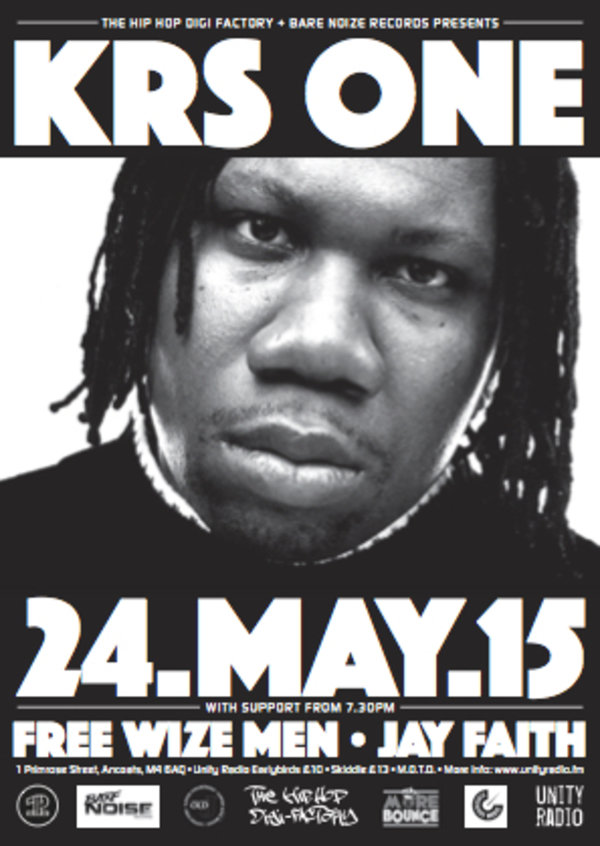 An American rapper and producer from The Bronx, KRS One and rose to prominence as part of the group Boogie Down Productions, who met in the late 80’s when KRS One was a graffiti tagger, and Scott Sterling, aka ‘Scott La Rock’ was a Youth Counsellor. Embracing the inner city environment and the creative energy within, KRS One, played an integral role in the birth of Hip Hop, the culture which spread through every major city providing young people with identity and a sense of community.

Following the release of the group's debut album, Criminal Minded, La Rock was shot dead, but KRS-One continued the group, effectively as a solo project, with conscious powerful lyrics. He began releasing records under his own name in 1993.

KRS One is noted to be a politically active musician having started the Stop the Violence Movement, after the death of Scott La Rock, and the Temple of Hip Hop, as well as addressing political issues in his music. His name, is an acronym for, KNOWLEDGE REIGNS SUPREME OVER NEARLY EVERYBODY, which is embodied in his other alias, the ‘TEACHA’.

KRS One’s music reflects all the disciplines of Hip Hop Culture. As well as a Rapper, KRS One is an advocate for Hip Hop elements, Graffiti tagging , BBOY’ing, Turntablism, and of course, Rapping, which are all celebrated in his classic track’s 9 Elements, and Step into a world.

This is an exclusive opportunity to be one of a limited number of people to witness one of Hip Hop’s greatest, up close, and personal, in a great venue with incredible sound.Support on the night, will be provided by Mancheste’s, JAY FAITH, and experienced Producer / Rapper, who has blessed stages opening shows for UK Tours with Nas and Busta Rhymes. He will be joined by Unity Radio Tipped to Blow 2015, and emerging Manchester artists, FREE WIZE MEN. DJ ‘s on the night, will be Didjet, from SkullSnap Records

.As a celebration of Hip Hop culture, and paying respects to KRS One, we also have a graffiti dedication painting from Manchester’s Master Bomber ONEK, along with live BBOY performance by FreshSkillz Dance Crew, doors from 7.30pm, performances begin at 8.