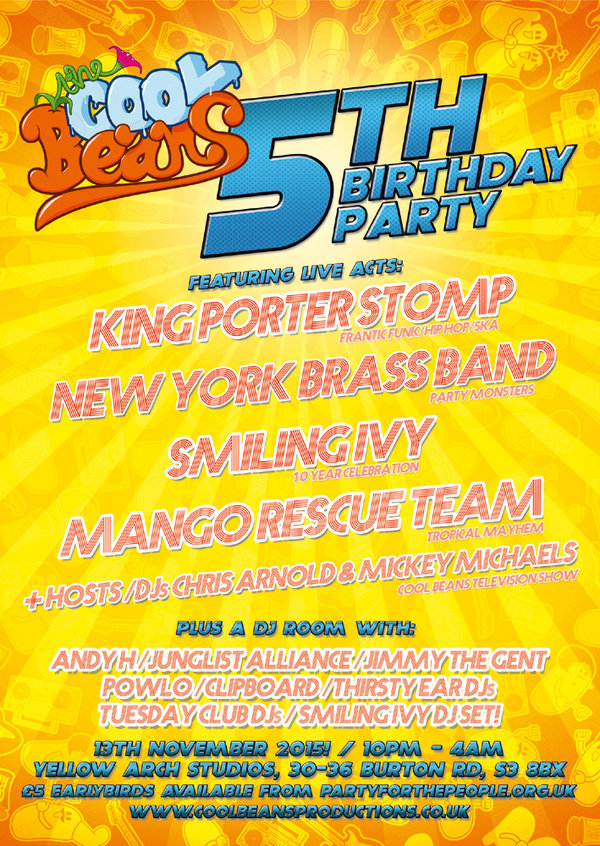 Can you believe it? Five whole years of Cool Beans. Something that started as a small time club night/radio show has spawned five whole years of parties along with two television series, a management agency, a monthly column in Now Then and a regular slot on FM radio. Cool Beans has also enabled us to host stages at festivals, take a musical comedy show on the road, DJ all over the UK & beyond and make a whole bunch of friends in the process!

As always, a big thanks to everyone who has helped us along the way, it means a lot that you keep coming to the events and tuning in to our tv/radio output. As you know by now, there's only one to celebrate a beans milestone, and that's by hosting a huge party in a venue we've never partied in before! Hooray!

This year we're hitting up the newly refurbished and absolutely legendary Yellow Arch Studios! And here's who you can find performing on the night...

KING PORTER STOMP
Festival scene legends, Brighton-based King Porter Stomp return to Cool Beans after blowing us away a few years back, bringing with them their unmistakeable funk/ska/dub/hip hop sound! For added excitement, Davin from the Staxx Brothers (Seattle, USA) will be joining KPS on stage for extra funkiness!
http://www.kingporterstomp.co.uk/

NEW YORK BRASS BAND
Some people call them "the ultimate party band", and you know what, we'd have to agree with them. These brass monsters have been known to clamber on bar tops, take parties into the street and hang upside down playing trombones! You know you're in for a good time when NYBB are on a line up!
http://www.newyorkbrassband.co.uk/

SMILING IVY
A band close to our hearts, alongside them we've toured the French Alps, the Scottish Highlands and countless UK cities. The evening will host a double milestone as Smiling Ivy shall also be celebrating ten whole years!
http://www.smilingivy.co.uk/

MANGO RESCUE TEAM
Tropical mayhem galore from this Sheffield collective, expect inflatable palm trees and more coconut rhythms you can shake a stick at. Tropical rating will be through the roof for their set!
https://mangorescueteam.bandcamp.com/

+ DJs/HOSTS
Hapless chumps Chris Arnold & Mickey Michaels, from the Cool Beans Television Show, have been allowed out of prison for the night.
http://www.madeinleeds.tv/programme/cool-beans

We'll also have a second room going for this one, a DJ fuelled mega-mash-up-party-rave the like that Sheffield has never seen before! Working the platters that matter on the evening are as follows...