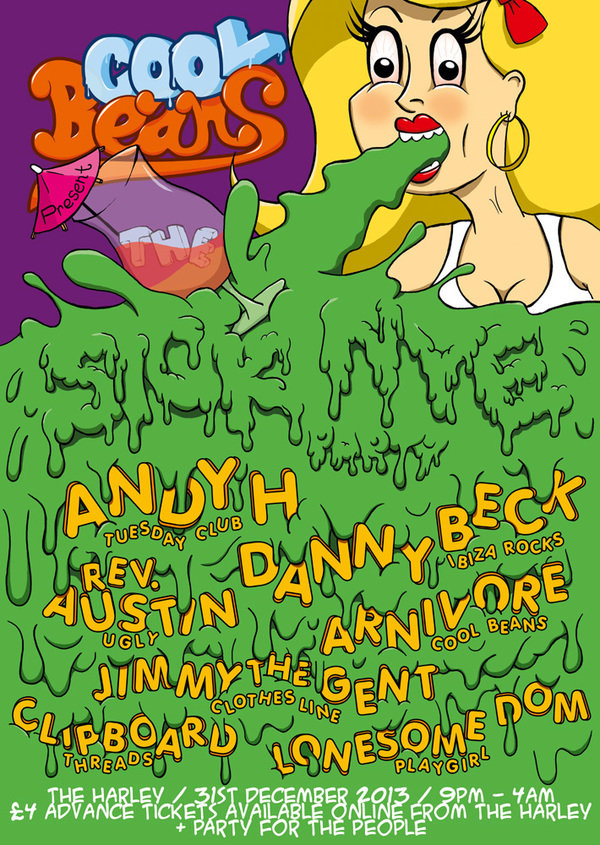 We originally were going to call our NYE event "The Cool Beans Sit Down Party with Games, Music & Shandy at Midnight" but our artwork guy (the illustrious Unseen Bean) informed us that our idea wouldn't be appealing to the cool kids. And a New Year's Eve party without cool kids is like a ball pool without the balls - an empty vessel void of any bright and colourful spheres.

Sounds like hell doesn't it? Well have no fear the Unseen Bean souped up our event and the artwork (which now features bright green vomit - take that the man!) and it looks like we're set for another mad one. "Oh but NYE is so overpriced" we hear you say. That's where you're wrong. £4 advance baby! "Well ok then, who's gonna provide the music" you now say, interested but not completely convinced. Well hold on right there…

ANDY H (Tuesday Club)
It's been said many many times before but it's the simple truth - Andy H is a DJ phenomenon. Resident at the massive Tuesday Club, he's taken his scratchy hands across many lands and he always impresses. Always. When recently playing with Zane Lowe, Zane stuck around for Andy's set, taking to the mic and declaring that this man was "probably the best DJ on the planet right now". Is Zane right? Well if you haven't seen Andy before you're going to have to come down to the show and find out. (Here's a clue, Zane is right).

DANNY BECK (Ibiza Rocks)
The man, the brand. Danny Beck breaks all the hearts, male and female, but then pieces them back together cos he's a great guy. An incredibly versatile disc jockey, illustrator and rapper (although he dabbles less in the latter) Danny spent the summer of 2013 being the Ibiza Rocks wunderkind DJing in clubs and bars on the party island, and occasionally just off the party island on a party boat in the party sea. He basically knows how to bring a party is what I'm trying to say. PARTY!

REV. AUSTIN (UGLY)
The nicest man in the business, Austin spent years as Wonky Ninja wowing crowds and hanging out with Kissy Sellout. His new moniker shows maturity and development - and his new production efforts set to be released in the new year will show just that. He still likes to bring the party though, he likes to bring the party and he likes to swing his large ball of ginger hair around as well. And that my friends, is the most perfect of combinations. Him and Danny shall be taking care of the final hours of the night, the drunker, looser hours as many people call them.

JIMMY THE GENT (CLOTHES LINE)
Those of you who follow Jimmy on social networking sites may feel that he's loosing touch with the general public. Between blowing up YouTube with his 50 Sniffs videos and inciting a feud with a local club night Jimmy The Gent is our token loose cannon for the evening. Will he play a 90s anthem that everyone forgot about? Will he take his top off and smother Red Stripe on his chest? Will he verbally attack anyone who requests a song he doesn't like? Only time will tell. Time and alcohol.

LONESOME DOM (PLAYGIRL)
Actually, make that three loose cannons. What can we possibly say about Lonesome Dom that hasn't already been said? Author, actor, singer, dreamweaver, underwear model - he's climbed the highest mountain and swum in the deepest sea. And he achieved all these things whilst entranced within the headiest narcotics trip. Let him open the show and open your minds.

ARNIVORE (COOL BEANS)
Arnivore wrote this event page and can't think of anything to say apart from he still doesn't regret getting that tattoo of the lobster on my crotch when he was 18, no matter what his parents say.

So there you have it, sound the party alarm and all that. It's going off down the Harley this NYE. Tickets are £4 advance, which is outrageously cheap for NYE, and it'll only be £5 OTD. Last year was a sellout, don't delay in securing your place for this - the final party of 2013!

Thanks for a fine 2013 everyone, see you on the partyfloor.