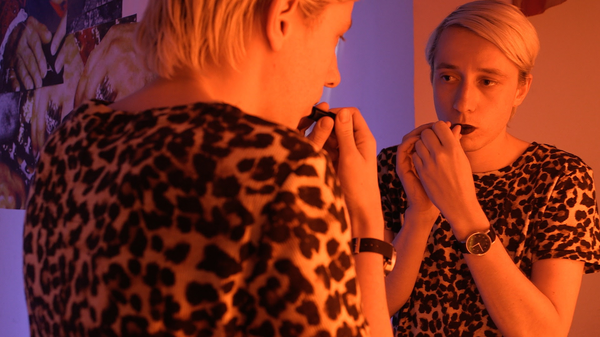 Cinenova’s monthly film series aims to materialise relationships between contemporary artist moving image practice and the feminist and organising legacies present in the Cinenova collection. For this special edition jointly hosted with Queer At Kings, Cinenova has invited Marseille-based artist Richard John Jones to select a film from our collection, Karen Everett’s Framing Lesbian Fashion (1992) to show alongside his All Closing And Dyke Bar And Everything Ending And Not And Death To The Ahistoric Vacuum (2015).The screening will be followed by a conversation between Richard John Jones and Nina Wakeford.

All Closing And Dyke Bar And Everything Ending And Not And Death To The Ahistoric Vacuum,
Richard John Jones
2015, 23 mins

This film emerges from a period of research that was conducted while on a residency at Lothringer 13 Florida, Munich, Germany. In a time when queer, lesbian and gay social spaces are rapidly closing down in many countries there is a question of how these lost spaces can be remembered but also how ideas of sociality and social space need to be updated. Drawing on the research material, the characters in my film are re-voicing, re-performing or re-enacting a variety of archival and theoretical texts. As we follow these actors through the space, we are witness to many small dramas, profundities, recollections or controversies and although there is a sense that the characters are all together in one venue they seem distant from one another, each with an urgency to be heard whilst not fully connecting themselves with the group as a whole. To me this is about this eternal conflict between the politics of occupying space and the notion of sharing it. The space of the film is also ambiguous (it could be anything from a small cinema to a bar, or an art space or private home). The timeline of the film is also cyclical and contains many internal repetitions and loops contributing to a sense of disorientation/reorientation. The film is an experiment of assemblage and re-enactment as a strategy for queering ideas of memory going beyond narrative form as having a beginning, middle and end. Instead, I wanted to consider how social spaces are constituted within a particular moment but somehow always formed from an identification or rejection of a political or historical context.

This highly entertaining documentary explores how North America's diverse lesbian culture has used clothing to signify social and political identities over the last forty years. The filmmaker combines her personal story (bracketing the film with a tongue-in-cheek fashion show by the film maker herself) with the fashion journeys of six other lesbians. Characters tell how in the early days of feminism, newly politicised lesbians shunned feminine apparel and the old butch/femme look for an androgynous uniform. In the 1990s, lesbians are edging toward the stage of mainstream American society, sporting a splash of culturally signified costumes that are sewn with possibilities and perils. The video uses archival photographs, interviews and 'women's music' to evoke days gone by. As the video progresses, the camera follows characters into lesbian households, boutiques and dance clubs. These cinema verite sequences imbue viewers with the ordinary flavour of revolutionary lives.

This series intends to materialise relationships between contemporary artist moving image practice and the feminist and organising legacies present in the Cinenova collection.

The format of the series is that an artist filmmaker is invited to select a film from the Cinenova collection which they would like to screen alongside a work of theirs.

Cinenova Feminist Film and Video Distributor was founded in 1991 following the merger of two feminist film and video distributors, Circles and Cinema of Women. Each was formed in the early 1980s in response to the lack of recognition of women in the history of the moving image. Both organisations, although initially self-organised and unfunded, aimed to provide the means to support the production and distribution of women’s work in this area, and played critical roles in the creation of an independent and radical media.

A digital archive of selected works from Cinenova Distribution is available for viewing at The Showroom.
http://www.theshowroom.org/projects/cinenova-digital-archive