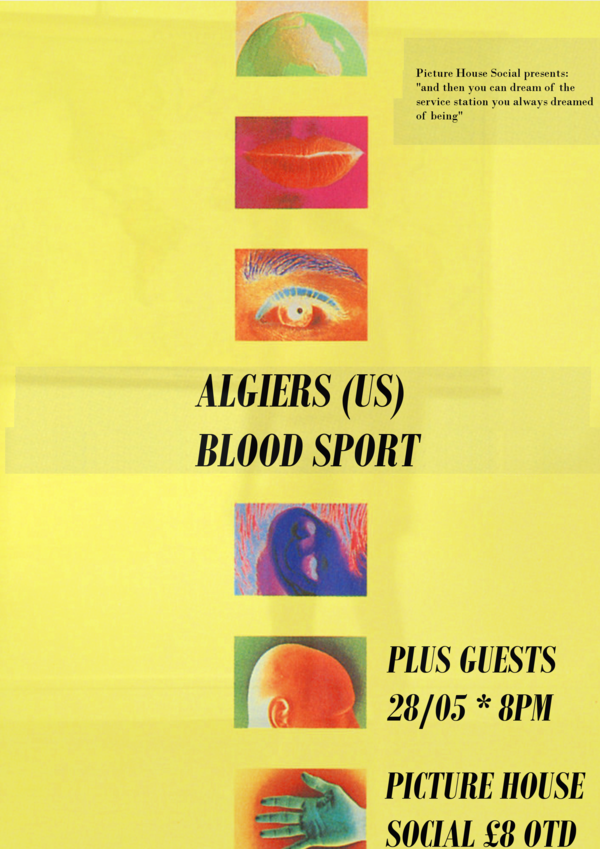 May 28th brings another special night to Picture House Social - we're delighted to have the incredible Algiers over from the United States, with touring pals (and S7 stalwarts) Blood Sport. More to be announced soon - this will be a long, intense and glorious evening.

The argument over politics' role in music seems never ending, but Algiers' soulful, industrial charged post-punk is delivered with such vigour that casts aside all doubts. In a time of encroaching right-wing dystopia, Algiers offer a rebuke that spans genres with a unifying atmosphere of dissent. The band hail from both sides of the Atlantic, but with a solid (and musical) base in Atlanta, Georgia. Their self-titled album has won universal acclaim from literally every single publication, and rightly so. They're touring with Blood Sport over the end of May and making a stop over in Sheffield just for us. To be honest they'd fit in very well as a Sheffield band. We'll see if we can hold onto them.

"Sounds like the Death Grips of gospel torching the South’s dark underbelly...the results are spiritual, political and confrontational." Rolling Stone

Blood Sport are Picture House Social regulars and ever since 2010 the trio have forged an arresting sound practice from within the city’s industrious art/music community. Their blistering guitar dynamics and pointed-yet-pointillist lyrics meshing into rough-house, techno-gilded polyrhythms, with an untrammelled urgency pervading their tightly wound sound and all that surrounds and informs it.

They've just released a new record through Blast First Petite (Factory Floor, HTRK, Nissennenmondai etc) and their own label Hybrid Vigour. We're glad to have them back!

"If groups like This Heat created the template for template-destroying music some 40 years ago, then Blood Sport are their contemporary spawn, continuing such annihilation with gleeful abandon and head-spinning flair - creating their own sound, and space, to operate within." The Quietus

"A glorious fusion of opposing forces: charging, African-ensconsed rythms that lock into endless, melody-imbued grooves wrangle with seething, disputatious antagonism that come via contorted, electrical fault vocals, guitars that switch from kraut to disco in the twitch of a tom" Loud & Quiet

Axe Laid To The Root by Blood Sport

MORE GUESTS AND DJs TO BE ANNOUNCED.