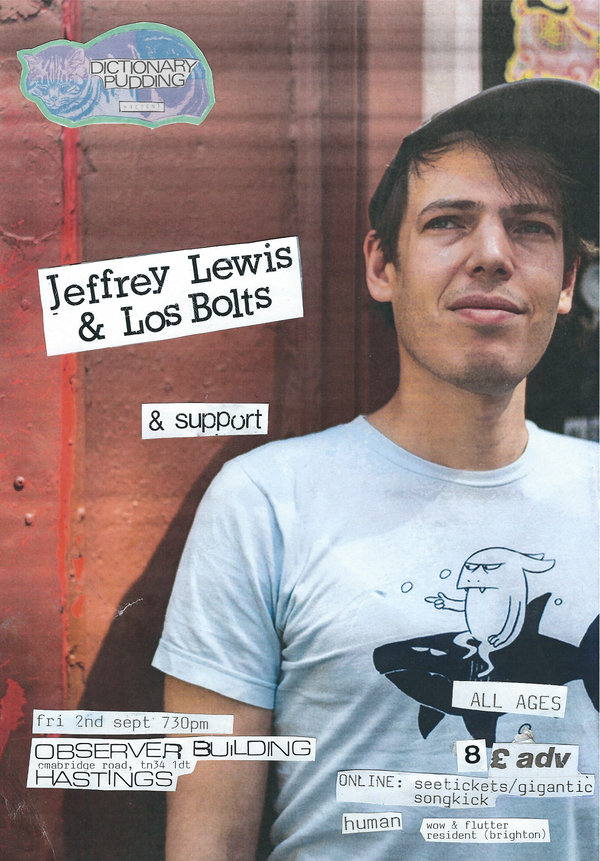 WONDERFUL SHOW, ALL AGES, HASTINGS, BRING IT ON

"A wordy force of nature… stirs you up with politics or knocks you sideways with sadness… ideas burst from Jeffrey Lewis like an overstuffed suitcase – strange ones, funny ones, poignant ones, usually a mixture…. kicking out ramshackle fuzzbomb jams… it's difficult to imagine how any couple of hours spent in Lewis's company couldn't prove inspirational." (four of five stars) - The Guardian

"...[F]or me Lewis is as close to unmissable as music gets and he didn't disappoint, raking brilliantly over the content of several albums (and he's never released a bad one) and leaving us, among many highlights, with [...] perhaps this festival's greatest moment." (Ranked #1 in the top-10 favorite sets of Green Man Festival 2014, even beating out Neutral Milk Hotel and Slint!) - Unwashed Territories

"...[H]ow come Jeffrey Lewis isn't huge? There's no doubt that he's one of the best lyricists currently producing music - easily right up there with John Darnielle - but how many more f**king records does this guy have to make [...] until he achieves anything that even remotely resembles a break? Why isn't he selling out arenas or making national television appearances or gaining recognition as one of the greatest songwriters of his generation? It seems like Lewis occupies somewhat of a blind spot..." - The Portland Mercury

"…ramshackle and beautiful noise… our reviewer had no compunction in crowning the lo fi scallywag as Lou Reed’s natural successor as punk poet of the New York streets. Lewis’s obsession with the grimy minutiae of the NYC streets and the syllable-crowded lines of his punk-folk ballads are points of similarity, psychic tendrils sending art rock nuggets back through time from underneath the weathered carapace of art-rock’s very own Grinch into Lewis’s still-beating rock and roll heart." - Louder Than War

"There are flash-in-the-pans and then there’s Jeffrey Lewis; since he began making records at the dawn of the 21st Century, there have been thousands of bands to reach fame and hit their hard decline. Lewis keeps challenging himself and his audience while maintaining the attitude and integrity of a cool local dude." - Jersey Beat

“[Jeffrey Lewis is] The best lyricist working in the US today.” - Jarvis Cocker (Pulp)

"...[T]he always-great Jeffrey Lewis [...] [he] can go from poignance to comedy and back in three seconds." - Time Out New York

"Jeffrey Lewis is my homeboy. [...] At his best, he's a vulnerable master of the humorously ineffable" - Robert Christgau

"Strumming a few chords on a guitar that may well be held together by the stickers covering its front, and leading a band that piles on a cheerful clutter... [Jeffrey is] a clever, articulate wordslinger, coming up with rhetorical conceits... and putting in a lot of preparation... [including] finely reasoned histories... affirming populism through primitivism." - Jon Pareles, The New York Times

"Bands as magical and genuinely original as this are as essential as oxygen." - Culture Delux

"Jeffrey is the only artist I've sent fan mail to.” - Jens Lekman

"Jeffrey Lewis sings as though absurdity were truth, and truth absurdity. And I think I agree with him." - Paul Banks (Interpol)

"Really great and impressive and inspiring and exciting... There's not a lot of people that can tell a story and use language like that in music." - Will Oldham

"For years, this icon of the Antifolk scene has been creating subversive, subcultural, clever and heart-breaking work, from folk or punk songs to comic strips." - Indie Magazine

"Effortlessly brilliant lines that would tangle the larynx of mere mortals tumble from his mouth, and all in that croaky underdog patter" - BBC.co.uk

"...[T]hrough force of will and sleight of hand, Jeffrey Lewis had the sizeable De Barra’s crowd wilfully eating out of his hand. [...]Lewis is a writer of the highest calibre. You suspect that he’d prefer to sell a hundred comics than a million records (he called an early EP The Only Time I Feel Right Is When I’m Drawing Comic Books after all) but his sharp, poignant, witty vignettes are pearls, absolute jewels. [...] these are the lines of a master craftsman.[...] He sounds like a placid Hammell On Trial, a less quirky Jonathan Richman, a heartbroken Lou Barlow, a hopped-up Side One of Bringing It All Back Home Dylan." - We Are Noise

"It’s truly staggering how Jeffrey Lewis manages to find new and inventive ways to articulate himself again and again, each time seemingly stronger than the last and each acutely original. It’s phenomenal when you think about it. Jeffrey Lewis and the Jrams got the crowd shuffling and head-bobbing early on [...] before proceeding with a carefully selected set stuffed with pounding new works. [...] Our favourite NYC storyteller... [...] Despite playing to a full house, I can’t help but feel that Jeffrey Lewis has consistently dipped below the mainstream radar [...]. Jeffrey Lewis is no doubt one of the great songwriters of his generation: he is dedicated, inventive and challenging." - Slate The Disco

"Ever since I accidentally stumbled in to a show and found Jeffrey Lewis performing, I have found him one of the most inspiring, delightful, & Must Listen artists of any sort." - Ted Hope (Film Producer of The Ice Storm, Storytelling, American Splendor, The Devil & Daniel Johnston, etc.)

"...[Jeffrey's] lyricism is some of the best in modern music [...] he has a savant-like ability to turn a phrase upside down, inside out and fold it up into some sort of origami crane; and then just as quickly, perhaps by just shifting the emphasis on a single word within a phrase, lay the metaphorical sheet of paper flat on the table without a single crease in it." (four of five stars) - Cheese On Toast, New Zealand

"Jeffrey Lewis is slowly but surely on a trajectory to immortal cult-status." - Line of Best Fit