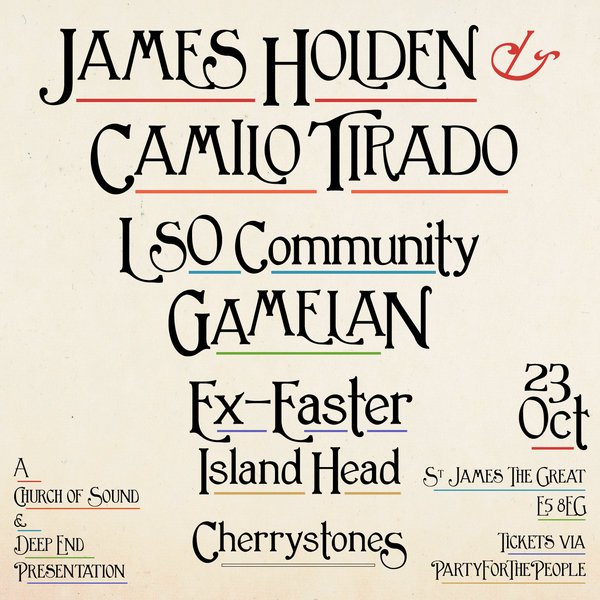 Church of Sound and Deep End proudly brings to St James the Great:

Originated from an invitation to host an entire indonesian gamelan orchestra, we present an evening of shimmering counterpoints, panethnical polyrhythms and esoteric visions.

Created in response to a brief from the Barbican / Muziekgebouw to celebrate Terry Riley’s 80th birthday and premiered April ’15 alongside Luke Abbott’s 555Hz, this will be the first time the piece returns to the UK, and likely to be the very last time it is performed.

An integral part to Indonesian Culture, the gamelan consists mainly of metallaphones of various sizes, hand-played drums and gongs. Often paired with traditional dance and shadow puppetry, gamelan is selfless in essence, a form of music with community at its heart that unfolds and envelops through counter-rhythms in multiple melodic parts.

The LSO group is led by Dr Andy Channing, director of UK’s leading Balinese gamelan group Lila Cita. The group will be performing on a gamelan angklung which is tuned to a 4-tone scale in the slendro tuning, and commonly heard in the context of temple anniversaries as well as transitional rituals related to death.

“Were honours given for crate digging, Cherrystones would probably have a CBE by now: he’s been scrabbling together mixes and solo releases since the late 90s” Fact Magazine

Throughout the night, veteran collector and NTS regular Cherrystones aka Godsy/Gareth Goddard will be playing selections from his personal archives, whether field recordings, beat orientated, psychedelically inclined or progressively visionary, permeating the energy of the night and of those who are present.

Deep End / Sinema City will also be on deck providing fluid frequencies from Japan and beyond from doors open onwards.

Food, beverages and a selection of teas will be available from the start.

All proceeds from the booking fees will be going to Calais Action, via Party for the People.