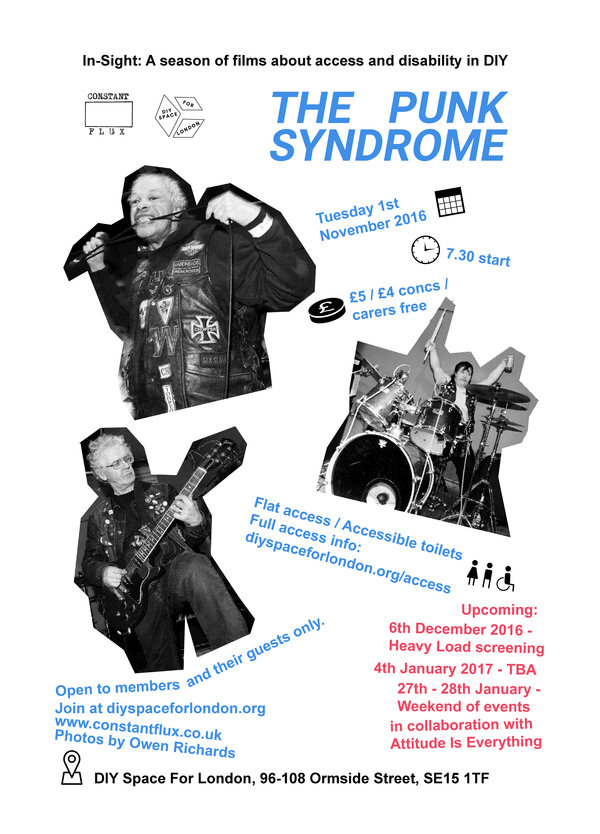 Constant Flux & DIY Space For London are proud to present a screening of the film The Punk Syndrome (original Finnish title is Kovasikajuttu).

The film follows the incredible Finnish punk rock band Pertti Kurikan Nimipäivät as they write, record, play shows in the band and live their daily lives. Their songs they write are about the problems in society as well as about things that they face in their everyday life: how going to the pedicurist sucks and the misery of living in a group home. The guys give piece of their mind to both politicians and people whose attitudes towards people with learning disabilities need improvement.

The band members, Pertti, Kari, Toni and Sami became famous in Finland after the release of this film in 2012 - even being selected as the Finnish entry for the Eurovision song contest in 2015. They have toured the world, including the UK twice, with Zombie Crash in 2013 and Hard Skin in 2014.

The film is directed by Jukka Kärkkäinen and J-P Passi. In Finland, The Punk Syndrome won the Audience Award at Tampere Film Festival in 2012 and the Jussi Award for the best documentary film in 2013. It was awarded as the "most innovative feature film" at the Visions du Réel film festival in Switzerland in 2012. In 2013 it also won the audience award in the SXGlobal category at the SXSW festival in Austin, Texas.

---
DIY Space For London is a volunteer/community run space, to attend events here you must be a member. Joining costs £2, lasts for a year, and you can pay online. Membership takes 48 hours to take effect and you will receive a membership card the first time you visit the space. Please note that you must be 18 years and over to be a club member; people under 18 can come to the space but must be accompanied by a cardholder.
http://diyspaceforlondon.org/join/