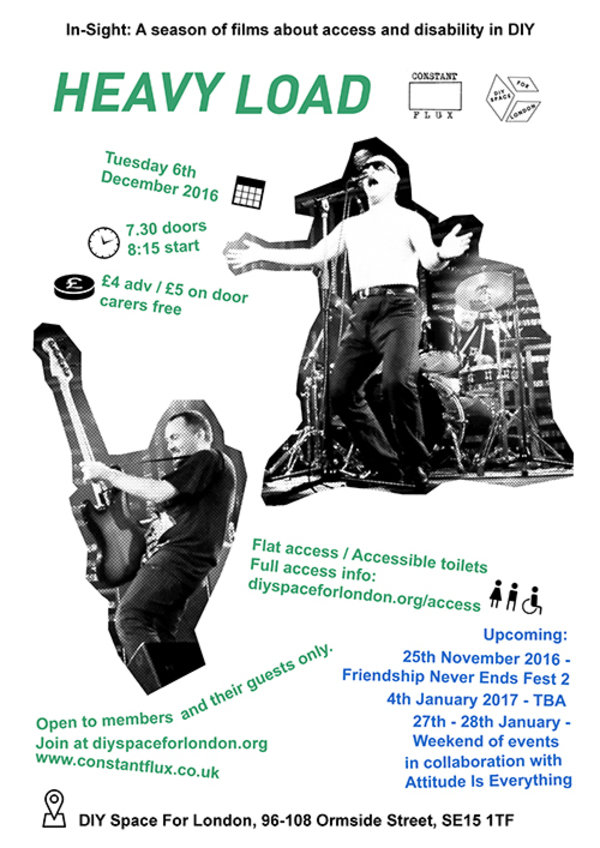 In-Sight: A season of films about access and disability in DIY

Constant Flux & DIY Space For London are proud to present a screening of Heavy Load.

The film was the inspiration for the film-makers of our previous screening - The Punk Syndrome. Heavy Load is about the Brighton punk band of the same name, Lewes' answer to the Ramones, a punk outfit subject to the inflammatory mix of ego, fantasy, and desire that fuels any emerging band.

Made up of musicians with and without learning disabilities, making the bands survival a precarious negotiation between two different worlds: on the one hand the institutional timetable of day centres, work placements and social workers; on the other the chaotic slacker life of rehearsal rooms, studios and gigs.

Shot over two years as the band record their first album The Queen Mothers Dead, the film is a comedy of conflicting ambitions, capturing the sweat and romance of playing in a band as they move out of the ghetto of disability club nights to test whether their dreams can survive in the mainstream.

It also charts the emergence of the charity they set-up to combat the lack of support for people with learning disabilities to have active social lives - Stay Up Late - which is celebrating it's 10 year anniversary this year! Check out the amazing work they do here - www.stayuplate.org

This film is part of a series of events from Constant Flux and DIY Space For London exploring access and disability in DIY, with more screenings, gigs and events happening over the coming months!