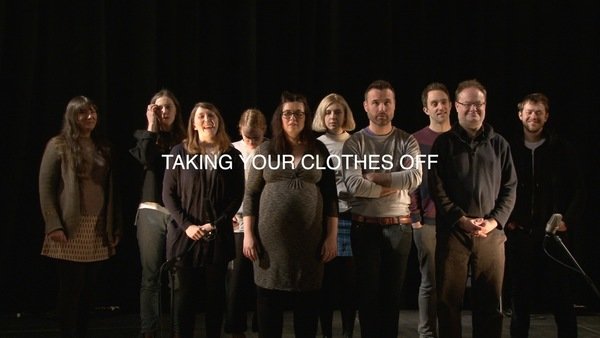 For the February Now Showing, UK based performance and moving image artist Kathryn Elkin has chosen to screen Sarah Turner's 'A Life in a Day with Helena Goldwater' (UK, 1996, 20mins). Turner's film imagines a fictional day in the life of a performance artist who doubles as a deck chair attendant.

Sarah Turner is an artist, writer and filmmaker with a rooting in avant-garde cinema. Turner's recent work focuses on the relationship between the abstract and narrative, exploring the theme of ecology through film. Turner has curated film programmes for the National Film Theatre, LUX Moving Image and the Tate Gallery and is currently a Reader in Fine Art at the University of Kent.

Alongside this, Elkin will be screening recent work 'Dame 2', a film which recreates an interview on Parkinson with Helen Mirren from 1975, transcribed and performed as a song by Elkin. She is backed by a choir of associates and friends she corrals into chanting in loose harmony. The work explores the notion of improvisation and power-balance within the recorded-as-live TV format, and re-cites/recites this particular interview, which is so often referenced as an example of historic sexism.

Elkin's performance and video works concern role-playing and improvising, alongside an ongoing interest in the outtake and clowning on set. The videos often resemble simplified versions of music videos and TV talk shows. Elkin's works typically manifest through citing a referent – such as an artist, a song, a writer, or performer – upon which she applies personal methods of translation, transcription and representation. She has an ongoing interest in shared cultural memory (as produced by popular music, television and cinema) and the melding of this information to biographical memory.