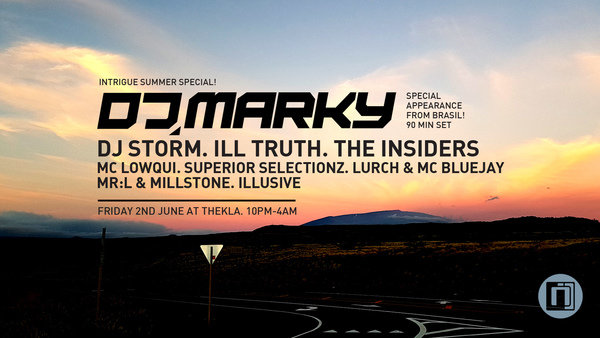 Summertime is coming, and the annual Intrigue summer special is upon us once again! This year we are pleased to welcome back DJ MARKY all the way from Brasil for a special 90 minute set, joined by MC LOWQUI. In support we welcome back the undisputed first lady of drum & bass, DJ STORM, bringing the Metalheadz flavours.

They will be joined by a full selection of Intrigue artists across both rooms, including ILL TRUTH, THE INSIDERS, SUPERIOR SELECTONZ, LURCH & MC BLUEJAY and MR:L & MILLSTONE. It’s set to be an amazingly heavyweight night of drum & bass, old and new!!

EARLYBIRD TICKETS AVAILABLE NOW FROM http://www.thekla.club/ -- DON'T SLEEP ON THIS ONE!

In a career that spans over two decades, DJ Marky has gone from an avid record collector and music enthusiast in his native Brazil to an internationally acclaimed DJ, producer and label owner. From igniting dancefloors across the globe to releasing some of the most seminal drum & bass tracks ever to see wax, he continues to amass an unsurpassable list of achievements, all driven by his dedication, phenomenal technical skills and unique flair. Retaining the same passion for music as the day that it all started, Marky remains at the forefront of not just the drum & bass scene, but the music world at large. We are excited to have him back to Intrigue after a storming set back in 2014.

Storm has always been one of the most influential DJs within drum and bass, known for her tight mixing skills and exclusive selections. As one of the Metalheadz label's chief selectors, she represents the crew at their residencies, label nights and tours as well as countless solo gigs. More recently, she's linked with other like-minded female drum and bass artists to form Feline and has travelled with the crew to venues across the globe. An Intrigue regular since day one, we look forward to welcoming her to the Thekla!

Ill Truth, formerly known as Despicable Youth, are two young guys from Bristol. They met at Bridgwater College whilst studying music production. Through a mutual love of drum & bass and the art of writing tunes, this stellar collaboration was formed. Typically known for their darker soundscapes and rolling drums, ill Truth are rising fast up the UK ranks, gaining support from DJ Marky, Friction, Doc Scott, Grooverider, The Insiders & more. Look out for 'Open Rhode' appearing on the latest Intrigue compilation, 'Intrigue 14'. We are excited to present their Intrigue debut!

Intrigue founders The Insiders have been instrumental in developing the deeper drum & bass scene in Bristol for fifteen years. They have an impressive discography that spans some of the biggest labels in the scene, including 31 Records, Good Looking, Renegade, Frontline and Defunked. Fresh from tour dates across America, Europe and the UK, they have recently been working on new material in the studio with Ayah Marar.