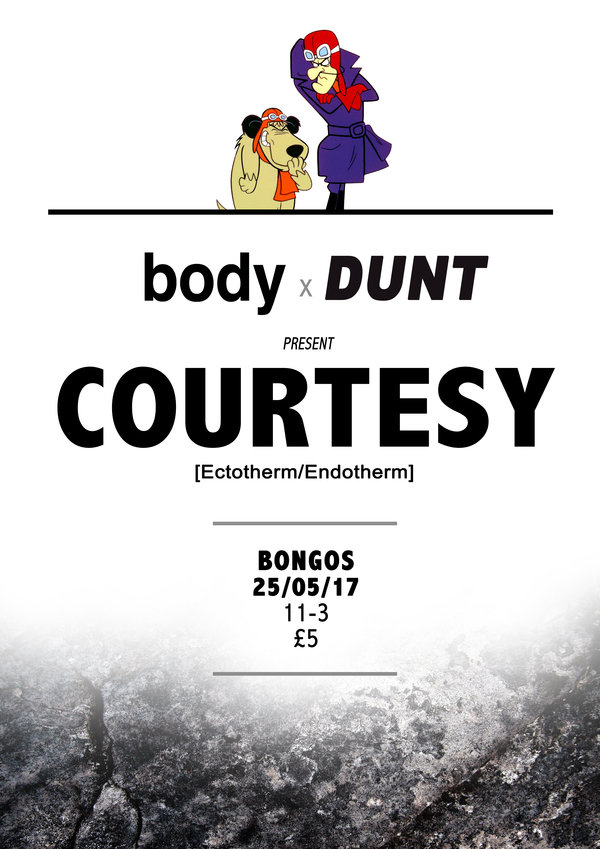 After two smashing resident parties at everyone’s favourite red bar, Dunt Club is back for its third instalment at a new stomping ground - The Bongo Club – to reel in the end of term. For the hallowed event we’ve teamed up with our older brother – body - to present the one and only, Courtesy, for her Scottish Debut.

For those who aren’t familiar, Najaaraq Vestbirk (Courtesy) is a DJ, journalist and the co-label owner of Copenhagen’s Ectotherm imprint. Hailing from Greenland and residing in Copenhagen, Najaaraq was previously one half of Ung Flugt (translation: Young Escape), a youthful, party-oriented duo whose rapid rise was paralleled only by the project’s quick dissolution. A few years later, Vestbirk re-emerged as Courtesy, taking a more refined approach and also serving as part of the all-female Apeiron Crew.

Since breaking away from Apeiron Crew, Courtesy has established herself as a formidable solo artist and launched Ectotherm with her former Apeiron cohort Mama Snake, which holds a monthly residency on London’s NTS Radio. Her lauded Crack Magazine and FACT mixes in 2016 attest to her penchant for blending styles that push the boundaries of dance music: fuzzier textures meet polished productions, silky electro and rave-influenced breaks. 2017 has brought more acclaim to her deft mixing abilities with her recent boiler-room debut and mix on Rinse’s Hessle Audio show which featured in Pitchfork’s top mixes for April.

When Courtesy’s not working on mixes, writing or digging for overlooked breakbeats she’s taking major slots at clubs all across the world at the likes of Concrete, De School and Berghain. She’s also just completed a tour across Asia with Avalon Emerson - who’s set at Sneaky Pete's for Juice will go down as one of the best we’ve seen in the capital.