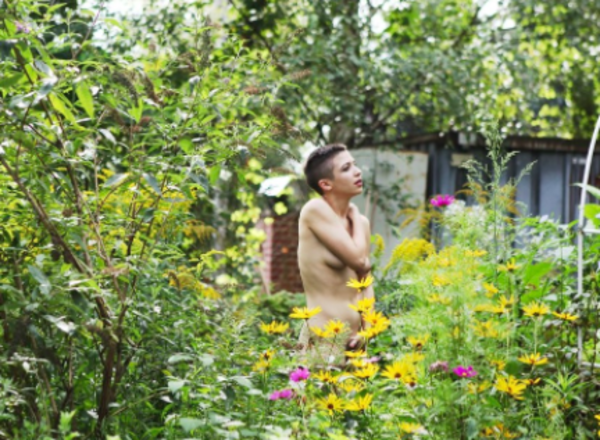 Cinenova is delighted to present a screening of When We Are Together We Can Be Everywhere (Marit Östberg, Germany, 2015) as part of artist Liz Rosenfeld’s Goethe at LUX Residency. Marit Östberg & Liz Rosenfeld have selected two works from the Cinenova collection to show alongside their film.

Sex Lies & Religion
Annette Kennerley, UK, 1993, 6mins
Then you lit a cigarette and carefully put the tip of it to the corner of the photograph and watched it smoulder and curl...' Sex Lies & Religion is a sexy dyke film made the day after two women met at the Clit Club.

Liz Rosenfeld is currently The Goethe Institute artist in Residence at LUX. During her residency, Liz will continue her creative body of research that she has been working on for the last year and half regarding the themes and characters in her first feature film, a futuristic queer speculative fiction work, FOXES. During her time at LUX, Liz will conduct creative research regarding questions dealing with queer dystopia, a positive embrace of apocalypse, invisible genocide, and drawing parallels between the way information was publicly disseminated in the early days of the AIDS/ HIV crisis, and the current state of climate change and environmental destruction. Check The Lux website for a series of events related to Liz's work at The Lux. Liz is a Berlin based artist utilizing disciplines of film, video and live performance, to convey a sense of past and future histories. Rosenfeld is invested in concepts of how history can be queered and experienced through the moment and the ways in which it is lived and remembered. She explores how we identify ourselves with in/out community and social poly-relationship configurations. She is part of the Berlin moving image collective, nowMomentnow.

Cinenova is a non-profit organisation dedicated to distributing feminist film. Formed in 1991 from the merger of two feminist distributors, Circles and Cinema of Women, Cinenova provides the means to discover and watch artists, experimental, narrative, documentary and educational moving image works. Cinenova is a collectively organised volunteer led organisation.

DIY Space For London is open to members and their guests. Membership costs £2 a year and takes 48 hours to take effect. Join here: diyspaceforlondon.org/join

Please email info@cinenova.org if the full ticket price is prohibitive - or if you have any specific access needs you want to discuss -and we’ll do what we can to make sure you can attend.