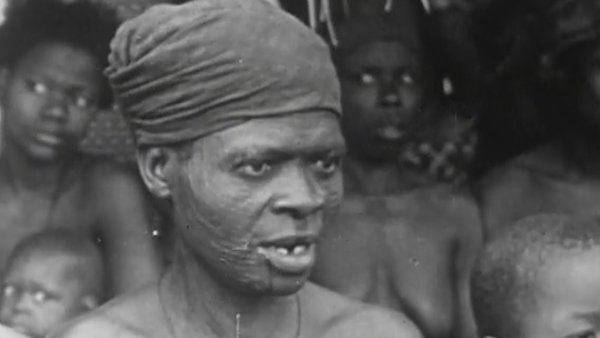 For the August Cinenova Now Showing, artist-filmmaker Onyeka Igwe has chosen to show a selection of films from the Cinenova collection alongside her own work Her Name in My Mouth.

Now Pretend - Leah Gilliam (USA, 1992, 11mins)
Now Pretend is an experimental investigation into the use of race as an arbitrary signifier. Drawing upon language, personal memories and the 1959 text, "Black Like Me", it deals with Lacan's "mirror state" theories of beauty and the movement from object to subject.

The Body Beautiful - Ngozi Onwurah (UK, 1990, 23mins)
This bold exploration of the relationship between a white mother who undergoes a radical mastectomy and her black daughter who embarks on a modelling career reveals the profound effects of body image and the strain of racial and sexual identity on their charged, intensely loving bond.

Leah Gilliam earned her Masters in Fine Arts, Film and Video at the University of Wisconsin-Milwaukee in 1991. Her work destabilizes categories of identity, temporality, and genre. Her work has been shown extensively at festivals and screenings internationally, including the New York Video Festival, Film Forum (Los Angeles), Institute of Contemporary Art (London), the Whiteney Biennial (New York), and the Festival Pan Africain du Cinema de Ouagadougou (Bukino Faso).

Jamika Ajalon is an inter-disciplinary artist fortunate enough to have collaborated with many brilliant creatives across the globe. Mediums include written and spoken word, sound, and photography, film, video, text, and music.

Ngozi Onwurah takes on the issues of time and space in her work which embraces heterogeneity and multiple sites of subjectivity. Onwurah consistently navigates and challenges the limits of narrative and ethnographic cinema by insisting that the body is the central landscape of an anti-imperialist cinematic discourse.

Image: Her Name in My Mouth - Onyeka Igwe