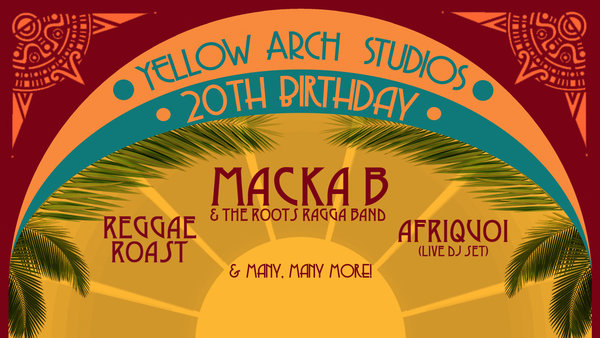 Since 1997, Yellow Arch Studios has proudly been a part of the Sheffield music scene and to celebrate turning the ripe old age of 20, we're doing what we know best... throwing some BIG parties to say thank you to everyone who has been a part our journey so far!

As part of his Health is Wealth UK tour, legendary, award-winning International Reggae artist Macka B and the Roots Ragga Band will be coming to Yellow Arch to perform all of his hits, such as Rasta Rise Again, Step Up, Wha Me Eat, Everybody Loves Bob Marley and more from a music career spanning over 30 years

Macka B is one of Britain's most influential dancehall toasters, pushing the music back towards a Rastafarian political consciousness. His rough, gravelly vocals gave him an instantly identifiable sound, and his production - chiefly handled by Mad Professor - updated dub reggae techniques for the dancehall age, proving that the two sounds weren't mutually exclusive.

2017 was witness to Macka B's latest milestone. He's dedication to the vegan lifestyle and spectacular weekly food updates allowed him to become a global viral success generating a staggering 50 Million views in less than a month! 2017 also see's him release his latest album 'Health is Wealth' out on the legendary Greensleeves label.

African Dance Music from London, UK, combining African styles and musicians with contemporary UK electronic music. Afriquoi draw on a range of African styles fused with futuristic UK dance music including on house, dubstep, soca, garage and glitch. For this special live DJ set, they'll be combining African percussion with a combination of dance floor bangers to get you moving & grooving!

Tickets available from Party For The People - https://goo.gl/kztLC1