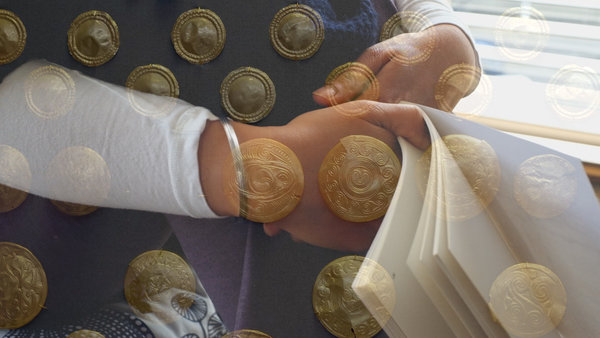 For the first Cinenova Now Showing of 2018, artist filmmaker Holly Antrum has chosen to present two films from the Cinenova collection in dialogue with her own works: Asides (2011), to the microphone please (2013) and her new film EIDOLON (2017).

Asides, Super-16mm on SD, 6.19 mins, 2011
Asides explores a fragmented recording of real-time speech, where sound continues and image cuts out. Stitching together an attempted ‘lip synch’ around the subjects is aided by a repetitious template in the form of a Sanskrit chant. In acknowledgement to the ever separate sources of sound and image, they diverge apart and close together again. The instance of something known off by heart, and the unfolding ambiguities of the relationships established by three voices in front and behind the camera build upon the limitations of analogue filming.

To the microphone, please (with Mrs Soprano), Super-16mm on HD, 8 mins, 2013
“The title Mrs Soprano, like the reference to the microphone evokes themes of presentation, performance, and specifically in the title Mrs Soprano refers to the common assumption of the presence of a voice within artworks. The artist is expected to have this ‘voice’ which is often audible in a certain ‘pitch’. The pitch becomes the tone or texture of the artwork whether light, earnest, dry, shrill, sombre.“ Extract from To the microphone, please (with Mrs Soprano): Holly Antrum and Rose O’Gallivan – Quote from interview in 2013 by Regina Barunke - Director, Temporary Gallery, Cologne.

EIDOLON, HD, 17.30 mins, 2017
EIDOLON (2017) responds to Sandeep Parmar’s epic-inspired English language poem of the same title, published 2015: The narrative of Eidolon is sweeping and fragmentary, archival in nature, where plural modernist and contemporary voices converge around Helen. “Partly a modern revision of the Helen myth, Eidolon meditates on the visible and invisible forces of Western civilisation from classical antiquity to present-day America” writes Parmar. In the film the obstacle and intimacy of camera, text, page and voice come to the surface, as well as a postcolonial feminist engagement with the presented histories of the text. This is set within two experiences of its reading: the authorial voice of Parmar interweaves with an anonymous reader who separately encounters the writing and its rhythm for the first time.

Reservaat - Clara van Gool, Netherlands, 8 mins, 1988
Stunningly shot (originally on 35mm) and beautifully edited, Reservaat is a witty pastiche about women and nature. Two women in fur dresses closely embracing, create an animal-like choreographed dance in deserted woodland. We hear only the sound of occasional distant traffic, the snap of a twig, birds singing. The camera whirls with the women as though part of the dance and the careful editing adds to the rhythm of the piece. Removed from the rest of the world, the women are free to express their desire.

Robina Rose’s film Birth Rites will be shown on a monitor at The Showroom alongside the screening.

Birth Rites - Robina Rose, UK, 53mins, 1977
Birth Rites is a film about 'natural' childbirth. It presents one woman's experience of giving birth as filmed by another woman, without any insistence on simple answers.

Holly Antrum (b. London 1983) is an artist filmmaker based in London, and a current work-live participant of the Programme 5 residency at the Acme Fire Station in Bow. She earned her Masters in Printmaking at the Royal College of Art, London (2011), and her BA Fine Art Painting at Wimbledon School of Art, London (2005). Through her work on 16mm, on paper and digital mediums, she is interested in the arrival of our accustomisation to celluloid-as-digital-material at once archived, and removed from the original and native aesthetic. This extends to the poetics connecting layered film processes, presence, communication and templates of speech, memory and in-situ sound. Catalogue, a 19-minute work on Super16mm-HD (2012-14) has received solo gallery installations: Catalogue at Edinburgh Sculpture Workshop, Edinburgh (2016) and A Diffuse Citizen at Grand Union, Birmingham (2014). The film was the focus of an edition of the Flat Time House / Electra curated events series Someone else can clean up this mess at Flat Time House in 2014. Her work has had international screenings since 2012 including Flatness curated by Shama Khanna at Microscope, Brooklyn (2015). A new HD 17-minute film commissioned by International Literature Showcase has yet to be shown publicly, EIDOLON (2017).

Cinenova: Now Showing began in March 2015 and runs monthly. The series intends to materialise relationships between contemporary artist moving image practice and the feminist and organising legacies present in the Cinenova collection. Now Showing future invited protagonists for 2018 include: Kimberley O'Neill, Alberta Whittle, Victoria Sin and more to be announced.

Cinenova was founded in 1991 following the merger of two feminist film and video distributors, Circles and Cinema of Women. Each was formed in the early 1980s in response to the lack of recognition of women in the history of the moving image. Both organisations, although initially self-organised and unfunded, aimed to provide the means to support the production and distribution of women’s work in this area, and played critical roles in the creation of an independent and radical media.

Cinenova currently distributes over 500 titles that include experimental film, narrative feature films, artists’ film and video, documentary and educational videos made from 1912 to 2001. Cinenova holds a large collection of paper materials, books and posters related to works it distributes, and the history and politics of film and video production. The thematics in the work at Cinenova include oppositional histories, postcolonial struggles, domestic and care work, representation of gender and sexuality, and importantly, the relations and alliances between these different struggles.