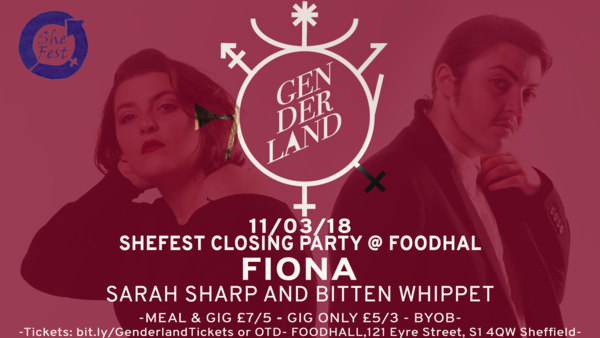 Closing SheFest 2018, Genderland @ Foodhall will launch the first instalment of FIONA’s Songs of Experience Project, showcase some fantastic female musicians and raise money for Foodhall, an organisation that supports the Sheffield community by encouraging meal sharing and reducing food waste.

Join us in Foodhall's welcoming space for community meal and then sit back and enjoy some great music from two local Sheffield acts, Sarah Sharp and Bitten Whippet, and finish off the night with a headline performance from FIONA and her band, launching her new single.

The event is BYOB and is open to anyone who wants to come, share a meal and support local musicians. Children are welcome, but be advised that it may be quite loud and alcohol will be consumed on the premises. Foodhall has disabled access and adequate seating. Please let us know if you will need any assistance at the event. We will also be taking Pay as you feel donations on the night to support Foodhall.

Cheap ticket is for students and those of you on a low income.

FIONA is a singer-songwriter based in Leeds. Over the past year she has been working on a set of songs written with and inspired by the community as part of her Songs of Experience Project. The first three instalments to be released will explore issues surrounding gender, mental health and sexuality. Influenced by Nick Cave, Pj Harvey and Joni Mitchell her songs feature complex and expressive lyrics supported by her powerful voice and folk inspired instrumentation.

Sarah Sharp’s peculiar brand of eccentric pop has been compared to artists as diverse as Amanda Palmer, Jarvis Cocker and Kate Bush. She sings songs about collectors and cryptic crosswords and the end of the world. Arriving in Sheffield in 2014, she played in folk duo Yellowcake before joining psych-pop band Mysteron for their debut EP We're Not From Here. After this she began developing her distinctive solo style and recording her first album.

Bitten Whippetippet is a guitar band based in Sheffield writing ethereal rock music inspired by PJ Harvey, 90’s grunge & Brit-pop, through to blues, folk and even hip hop! Formed in 2016 their repertoire features some grungy covers as well as some gritty originals lazily strummed guitars, nonchalant vocals and whispered harmonies sure to transport you to another plane. Their enthusiasm and friendship on stage is infectious.

SheFest, Sheffield’s Fringe Festival for International Women's Day, is a programme of events celebrating women. The festival, running from 5th-11th March 2018, features a wide range of inclusive and celebratory events which aim to engage women from all over the city!

Photo by The Hyde Park Harlots