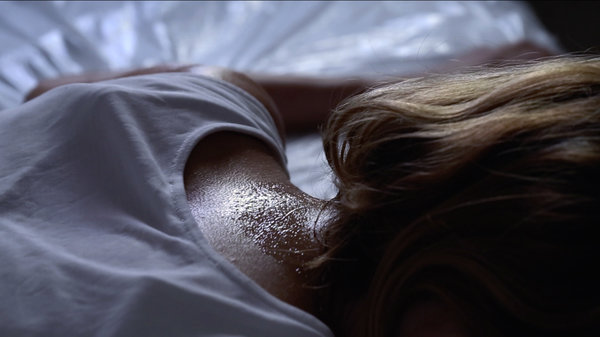 For this month's Now Showing, artist-filmmaker Kimberley O'Neill has chosen to show two films from the Cinenova collection alongside her own work, Circuits of Bad Conscience. Based around a science fiction premise, Circuits of Bad Conscience explores the transmission of affective energy between exploited viewers in a media circuit. The various characters that appear are formed from a cross-fertilisation of personal experiences, historical figures and commercial media material. Ideological power is engrained on the body and characterised as media-made-flesh.

Showing with:
The Hired Hands (Judy Jackson, UK, 1985, 30 mins)
This documentary takes a critical look at the conditions of employment for the one in three women who work as typists, receptionists, clerks and secretaries in Great Britain and examines why women in these positions are often underpaid and exploited.

Delilah (Tanya Syed, UK, 1995, 12 mins)
A kinetic meditation on female expressions of power and desire. A chiaroscuro of tension and release.

Judy Jackson has won many awards for her documentaries about Human Rights. Early in her career, at CBC’s ‘the fifth estate’, she documented the abuses of Dictators in Chile, Argentina and Guatemala. Then, working from England, (BBC, ITV and C4), she made films including ‘The Hidden Holocaust’ (Guatemala), ‘In Search of the Assassin’ (Central America’). Her film ‘They Shoot Children, Don’t They?’ (Guatemala), about street children murdered by the police, resulted in irate viewers writing in such numbers to the BBC, Amnesty International and the Guatemalan Government that policemen were finally convicted.

Tanya Syed makes single screen films and gallery based work. Her films have been screened nationally and internationally. She holds a BA Hons in Fine Art from Goldsmiths College London and an MA from Central St Martins College London. She taught 16mm film-making skills at the London Film-makers Co-op in the 90's and lectured in Film/Video at Anglia Polytechnic and Derby University. Her work is distributed by LUX and Cinenova.

Cinenova was founded in 1991 following the merger of two feminist film and video distributors, Circles and Cinema of Women. Each was formed in the early 1980s in response to the lack of recognition of women in the history of the moving image. Both organisations, although initially self-organised and unfunded, aimed to provide the means to support the production and distribution of women’s work in this area, and played critical roles in the creation of an independent and radical media.

Cinenova currently distributes over 500 titles that include experimental film, narrative feature films, artists’ film and video, documentary and educational videos made from 1912 to 2001. Cinenova holds a large collection of paper materials, books and posters related to works it distributes, and the history and politics of film and video production. The thematics in the work at Cinenova include oppositional histories, postcolonial struggles, domestic and care work, representation of gender and sexuality, and importantly, the relations and alliances between these different struggles.
Now Showing intends to materialise relationships between contemporary artist moving image practice and the feminist and organising legacies present in the Cinenova collection.

Please email infoATcinenova.org if the full ticket price is prohibitive - or if you have any specific access needs you want to discuss -and we’ll do what we can to make sure you can attend.