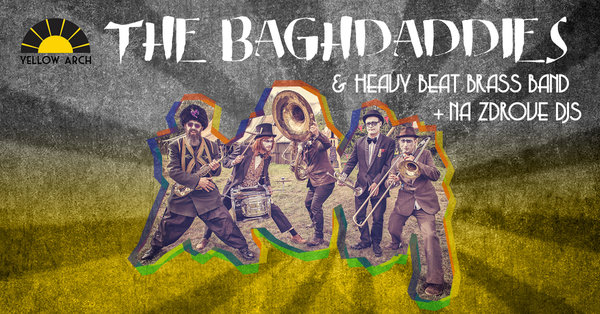 The Baghdaddies’ exuberant and rampant brand of world music is an exhilarating cocktail of Balkan melodies, ska and latin grooves and sizzling brass played with furious energy and theatrical humour, making them as unforgettable on stage as they are when performing as wandering brass troubadours. They take themselves incredibly seriously so you don’t have to…

“‘If jerry Dammers and Terry Hall had grown up listening to world music, The specials might have sounded very like the Baghdaddies.’”— Nigel Williamson – Uncut Magazine July 2010

“‘The band have a particular flair for the Balkans and capture its frenetic energy and flamboyance wonderfully. There is also a fair share of klezmer, jazz, ska and punk – an anarchic fusion where Ivo Papasov meets The Clash meets The Beat’ ”— Songlines Magazine