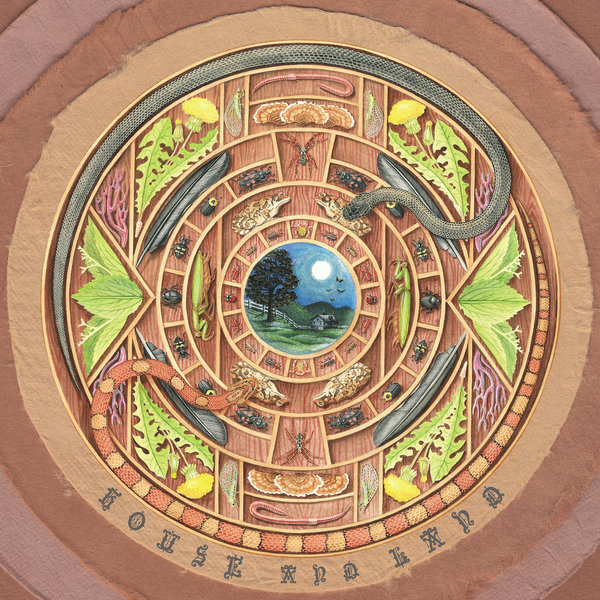 House and Land is the duo of Sally Anne Morgan (fiddle, shruti box, banjo, vocals) and Sarah Louise Henson (vocals, 12-string guitar, shruti box, bouzouki). Sally and Sarah started playing together after Sarah opened for The Black Twig Pickers for whom Sally plays the fiddle. The duo quickly discovered that they were both interested in the same very specific forms of traditional music.

House and Land features many drone elements, which is a direct homage to the presence of drone in Appalachian music. Equally important is their knowledge of the use of drone in contemporary classical music, which itself has often taken inspiration from nature-based drone styles from around the world. This connection between nature and minimalism is not uncommon and can be seen in artists like Agnes Martin and composers such as Éliane Radigue and John Luther Adams. Repetition is linked to music across the spectrum that evokes trance and other spiritual states.

A guitarist and composer from near Rhayader in Mid Wales, touring with his much-anticipated new album ‘The Longest Day’, released on Summer Solstice - 21st June 20187! He makes instrumental music inspired by the landscape, people and history of the area. Following in the footsteps of the American Primitive guitarists like John Fahey and Robbie Basho, and the British Folk revivalists like John Renbourne and Bert Jansch, he composes music for the 6 and 12 string guitar.

Influenced by Indian Ragas, African Kora music and ancient Welsh harp music from the Robert ap Huw manuscript he makes music to capture the atmosphere of the special and under represented part of Wales where he lives, adding to the long tradition of Welsh string music.

He has released a number of EP’s and received support from radio stations in the UK, America and Australia and supported artists like Ryley Walker, Songhoy Blues, Marika Hackman and James Yorkston as well as playing at Green Man Festival and Swn Fest in Cardiff. ‘The Gathering’ is his debut album, released on Cambrian Records in Spring 2017. A collection of instrumental pieces inspired by his mid Wales homeland that he is looking forward to taking on the road.

“Something of a young troubadour, Hay makes compositions that feel both incredibly detailed and beautifully light. A rising star and so much more.”
— Green Man Festival

“Hay’s album is a stunning turning point in what we have come to call folk music. A beautiful, frank and mysterious statement..”
— Folk Radio UK

Sharron Kraus is a singer of folk songs, a songwriter and multi-instrumentalist whose solo work and collaborations offer a dark and subversive take on traditional music. As well as drawing on the folk traditions of England and Appalachia, her music is influenced by gothic literature, surrealism, myth and magick. Her songs tell intricate tales of rootless souls, dark secrets and earthly joys, the lyrics plucked as sonorously as her acoustic guitar.

She has released five solo albums, the first of which, ‘Beautiful Twisted’, was named by Rolling Stone in their Critics’ Top Albums of 2002. As well as her solo work, Sharron has recorded an album of traditional songs – ‘Leaves From Off The Tree’ – with Meg Baird and Helena Espvall of Espers, written an album of songs to celebrate the seasons of the year – ‘Right Wantonly A-Mumming’ – which was recorded with some of England’s finest traditional folk singers including Jon Boden, Fay Hield and Ian Giles – as well as recording and performing as a duo – Rusalnaia – with Ex Reverie’s Gillian Chadwick, with Tara Burke (Fursaxa) as Tau Emerald and with Irish free-folk collective United Bible Studies.

Sharron has been featured in The Wire, fRoots, Uncut, The Sound Projector and Dirty Linen, and is one of the musicians focussed on in Jeanette Leech’s Seasons They Change: The Story of Acid, Psych and Experimental Folk. She has appeared on Radio 3’s ‘The Verb’, and recorded sessions for BBC Radio Scotland, BBC Radio Shropshire, Freakzone on Radio 6, and independent radio stations across the US.

Sharron’s latest album, ‘Friends and Enemies; Lovers and Strangers’, a collection of songs inspired by the Welsh Mabinogi folk tales, is released on Clay Pipe Music.