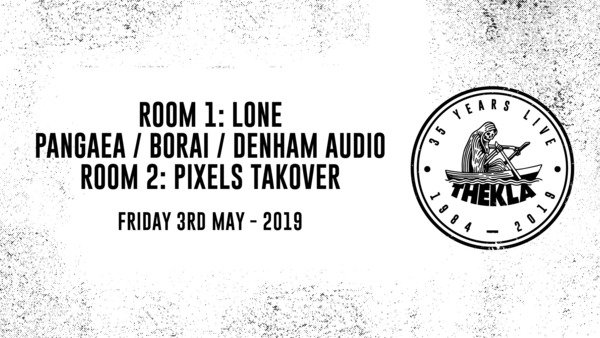 LONE
With releases on R&S, Magicwire and Werkdiscs, LONE is known for his genre-spanning sets filled with everything from House, Hardcore, Breaks, Jungle and much more. We can't wait to hear what he brings with him.

Pangaea
Hessle Audio Techno Don, Pangaea will be joining us in celebrating our 35th Anniversary. With releases combining Techno, House and Jungle, resulting in an incendiary hybrid rooted in UK hardcore traditions, Pangaea brings a rare understanding of modern club music to his sets.

Borai
Bristol soundman Borai comes with a reputation for being a hardened selector and a versatile producer synonymous with making high-quality music. Whether it be Jungle, Techno, Acid, Rave or Breakstep, he’s done it and done it well on labels like Hotline Recordings, Apple Pips Recordings & Happy Skull.

Denham Audio
The name may be familiar to many after their 2016 edit of the Swamp 81 anthem 'Footcrab', released on Addison Groove's 'Groove' imprint. However the limelight really shone down on the Sheffield collective after the release of their collaborative cassette tape 'Club Glow Vol 1' with Borai.

Pixels Top Deck Takeover - Motu, Namaste, Pixels DJs
After smashing the local Bristol scene, we only felt it right to invite Pixels down to showcase the best Bristol has to offer all night long on Top Deck. Keep an eye out for Motu b2b Namaste playing a 'Strictly Bristol' set.