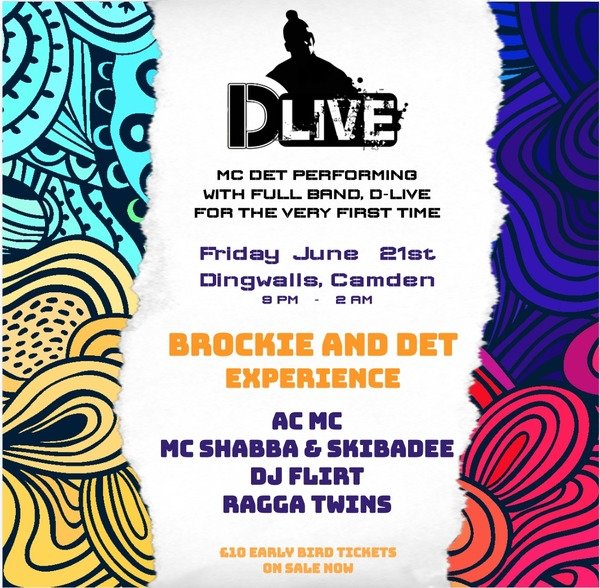 MC Det will be performing the very first time with his new band, D-Live.

A legend of the Jungle scene since way back in the rave days, when he used to MC on the then pirate Drum n Bass radio station Kool FM; MC Det is one of the original voices, still inspiring heads today.

Currently signed to one of the UK's biggest talent agencies, Echo Location, working alongside longtime partner, Brockie, as the Brockie and Det Experience.

Having spent the last few months in the studio, with a cast of his favourite musicians, expect the night to be a combination of D&B classics, alongside new a material fresh from those sessions.

His first Jungle MC album was 'Out of Det' released on Sour Records in 1995. The album saw success not only in the UK but across America, Japan and Europe. He has also recorded albums and tracks with numerous artists including Red Snapper and Cut la Roc showing a diverseness and versatility that demonstrates that he isn't limited to only jungle and drum n bass music. His last album available on Times Two Records was called 'Knights of the MC' and features Skibbadee, Dynamite MC, Ed Solo and the legendary Ragga Twins.

A seasoned performer he has gigged extensively and toured with the likes of Asian Dub Foundation Soundsystem and Red Snapper who were the supporting act for Prodigy (Smack Your Bitch Up Tour), Massive Attack & Bjork. TV work includes an appearance on The Jools Holland Show with Red Snapper. Widely recognised as one of the UKs top mcs in the jungle scene he still appears every weekend in clubs and big raves up and down the country and continues to perform on Kool FMs most popular show every Sunday from 9-11pm with his longtime partner of 20 years DJ Brockie.