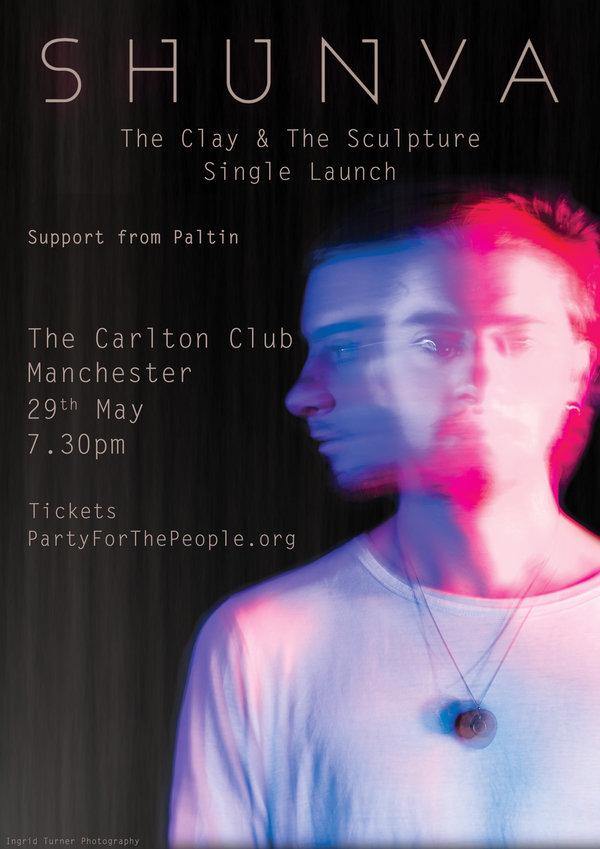 “The Clay and the Sculptor” Is a new single by Irish electronic music artist Shunya. Featuring driving beats and warm bass lines, Fans of Caribou or Cosmo sheldrake will enjoy this track’s twists and turns. Cerebral beats are interrupted by romantic string melodies all orchestrated by the multi-instrumentalist himself, with lyrics exploring themes of birth in all its forms. This single is an investigation from the microscopic birth of embryos to the massive “stellar evolutions” birth of stars.
Alan Keary is a multi instrumentalist and producer, with a strong musical heritage, writing and producing music from the age of fourteen. Now based in Manchester and performing under the alias Shunya, his sound is an amalgamation of influences, ranging from his early musical background of classical violin to the sounds of Manchester's electronic music scene which compliment his highly accomplished abilities as a jazz bassist. With influences referencing artists such as Flying Lotus, Bjork and Eric Whitacre.

His recent collaboration with DJ Yoda's & Breakfast of Champions live band has gained Shunya a notable reputation as a collaborator. With co-writing on tracks such as "Pebble Beach" going on to be play listed by BBC 6Music. Other notable collaborations include Werkha, (Tru Thoughts, Brownswood Bubblers) & Josephine Oniyama (Rubyworks), lending arrangement and performance of strings & bass.

Live performances display varying arrangements ranging from a duo to a 12 piece band. Virtuosic solos fly above live beats drawing similarities to the likes of Snarky Puppy or Robert Glasper. Keary features as violinist, bassist and vocalist whilst also delivering the texture and backbone of electronic beats loops and samples through Ableton.

"What Shunya are doing is super-creative, unique and musical!"
- DJ Yoda

'We've been watching Shunya since he first started out. His latest EP Mountain Gazer is a massive leap forward in both production and composition. Definitely one to watch out for.
- GoGo Penguin

“Full of musical and vocal surprises and it reveals more with each listen.”
- Mark Buckley

“Not only are Alan's string arrangements imaginative, he is a consummate all-round musician with innovative ideas that shine
within his music”