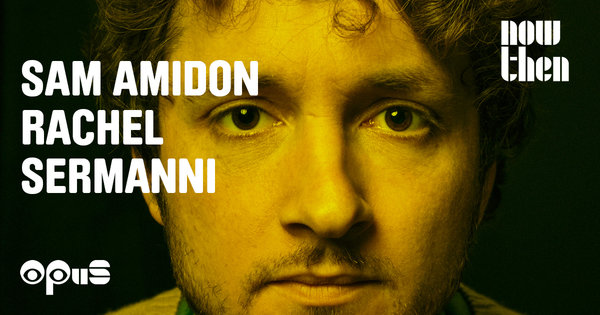 Opus is proud to present two of the finest Folk, Alt, Country... artists, on a rare billing together. It's going to one special show!!!

Sam Amidon is an American guitarist, banjo player and fiddler who grew up in a folk music family in New England. His next recording, due for release in November by Nonesuch Records, is the Fatal Flower Garden EP (A Tribute to Harry Smith), a four-track single from Sam Amidon. Amidon first publicly performed the songs on this EP – all of which were on Smith’s beloved and influential Anthology of American Folk Music – for a concert commissioned by Ancienne Belgique in Brussels, Belgium, as part of its large-scale Anthology tribute. Fatal Flower Garden was recorded over two days in East London with Amidon and frequent collaborator Shahzad Ismaily playing all the instruments; Leo Abrahams engineered, produced, and mixed. The 7” EP is available to preorder from the Nonesuch Store with an instant download of the track ‘Spike Driver Blues’. Fatal Flower Garden will also be available to download on iTunes and Amazon and stream at Spotify, Apple Music, and other digital service providers. As well as North American dates, Amidon tours the UK and Ireland this October and November; dates are listed below and here.

Amidon says: “Fatal Flower Garden is my tribute to the elusive spirit of Harry Smith and to his wondrous Anthology of American Folk Music. Harry Smith believed in the secret connections and mysteries that existed in culture... whether it was the feeling of Thelonious Monk’s rhythmic phrasing; the patterns in string games and Ukrainian egg painting designs; the wild fiddle tunes; or the epic folk ballads. He understood American Folk Music to be a wildly heterogeneous category that included multiple cultural, racial, and linguistic elements.” He continues, “I love listening through the Anthology for its window in to 1920s musical practices in all their varied glory, but also for the silent consciousness of Harry Smith behind the whole thing. You can picture him listening to the recordings, expounding his theories about the connections between them, and digging all of it.”

Fatal Flower Garden is Amidon’s fourth recording on Nonesuch and follows 2017’s The Following Mountain. He also was one of four singer/songwriter’s featured on Kronos Quartet’s 2017 Folk Songs for the label.

“… his highly personal approach opens a window on the American past and lets us feel it like nothing else around.”
NPR All Things Considered

After the release of two studio albums, a live album, a raft of precious EP’s, a near decade of tour, followed by a year of learning what it is to be a Mother, Rachel Sermanni is returning with a new record.

Her third studio album, So It Turns was recorded in Berlin, three years ago, and inspired by her time studying & volunteering at a buddhist monastery, ‘So It Turns’ will be released in August 2019.

Rachel Sermanni is a dynamic (in many senses of the word) singer and songwriter whose performance and lyrics draw from a deep well of mystic lore, dreams, nature and the simple-complex experience of being human. A contemporary folk musician, influenced by a wealth of genres including jazz, rock, old-time and traditional.

Lush, evocative songwriting… the album juxtaposes tender songs of love and longing with darker, desperate songwriting that rages against political chaos, the refugee crisis and the looming climate emergency.”
-The Scots Magazine

“An album to savour, from an artist whose nuanced, often challenging work reflects these tortured times... 4/5”
- The Skinny