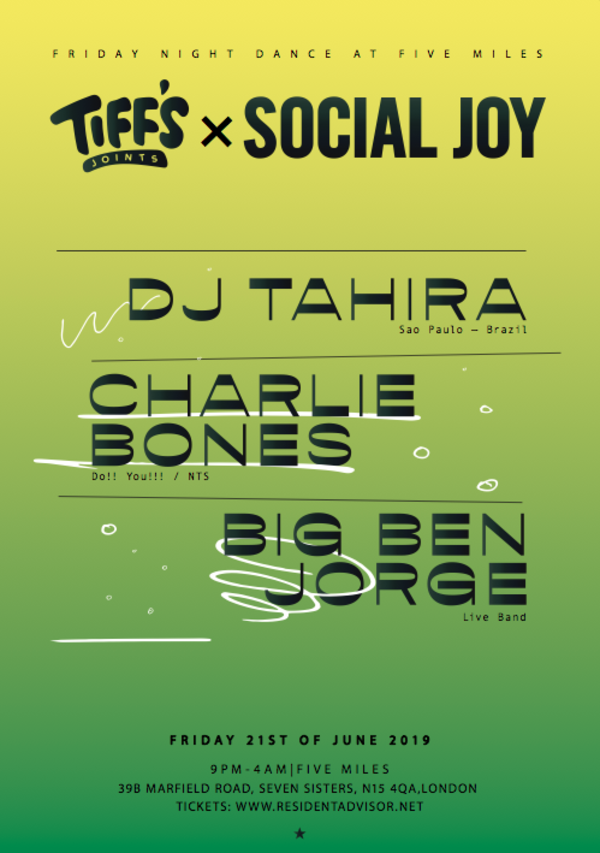 Tiff's Joints and Social Joy are joining forces to welcome our favourite DJ and Sao Paolo's finest - DJ Tahira - to London for a dance at the prestigious Five Miles in Seven Sisters. Joining the welcoming committee on the night are top selectors Mr. Charlie Bones, Tiff's Joints & Social Joy residents plus a live performance from Big Ben Jorge to guide us on our musical voyage. In addition to the venue's amazing custom sound system, the dancefloor will be adorned and arranged into an alluringly vibrant environment with plants, patterns and more.

Cutting his teeth on the Sao Paulo DJ circuit in the '90s, Tahira has become famous for championing all varieties of Afro-Brazilian music, styles that are often overlooked by western DJs in favour of the heavily American influenced Brazilian boogie and disco sounds. His edits have become staples for DJs such as Francois K, Gilles Peterson, Nightmares on Wax and more and his edit of Gilberto Gil's "Toda Menina Baiana" received the seal of approval from Gil himself. Last year saw the release of his Levanta Poiera compilation on Jazz & Milk, which received widespread critical acclaim and flew off the shelves in his home country and abroad. Tahira joins us for the first stop in a series of European dates this summer.

The self-existing eagle - Charlemagne Bones is the tireless man driving NTS Radio's flagship show, The Do!! You!!! Breakfast, where he showcases his record collection to the world for a full three hours, every weekday morning, all year round. As a grizzled veteran of a DJ, Charlie's sets have become renowned for their fun, free-flowing attitude, whether soundtracking a London club, a Croatian sunset or Sicilian music festival.

With influences ranging from Samba to Northeastern and Baiao styles, the diverse gathering of musicians that make up Big Ben Jorge found common ground in the toothsome grooves and nimble melodies of the Brazilian chart music of the 70's and 80's. Particularly, of course, that of the legend Jorge Ben Jor, the group's namesake. They pay heady homage to these artists, and the result is an explosively fun and gripping live experience.

Kicking off proceedings on the night are Social Joy and Tiff's Joints residents Guilhem Monin & Born Cheating leading and guiding the soiree into musical festivities.