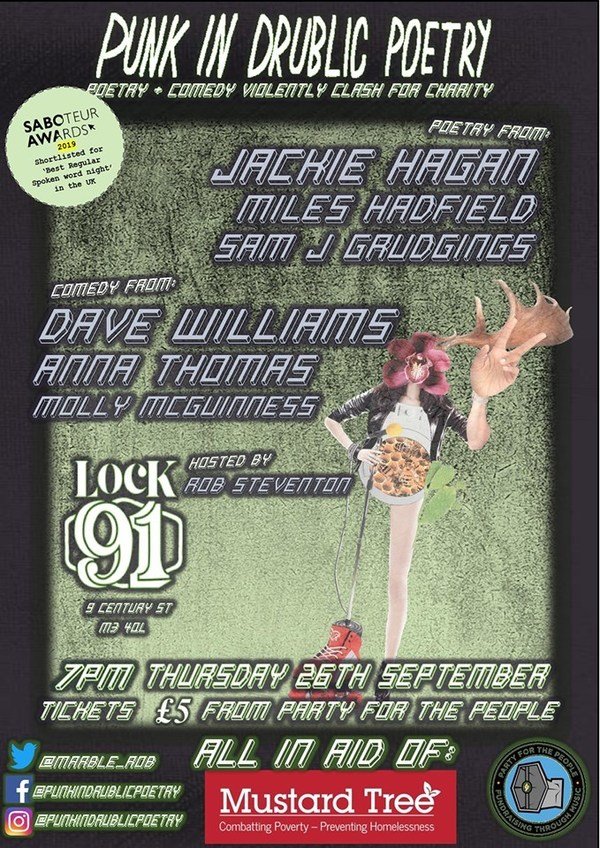 After a summer of festivals and a bit of a rest, Punk in Drublic is back with a killer line-up to raise funds for Mustard Tree.
September's event features Comedy from:

Dave Williams - With more than 20 years of experience in Stand-up, Dave has done everything from performing in Cyprus for soldiers returning from Afghanistan, to leading The Frog & Bucket comedy course- nurturing fresh new talent. He is not only a tour de force of hillarity, but a bloody lovely bloke.

...And Poetry from
Jackie Hagan - Following a storming set at Bluedot & 2 PIDP headline sets in 2017, Jackie is back! She's one of the most highly acclaimed Poets and Playwrights in the country. "Very funny- a hymn to those hanging on by their fingertips"- The Guardian

Sam J. Grudgings - Nominated for the Outspoken Poetry Prize 2019, and a finalist in the Word War Slam 2019. Sam's inspiring words and captivating delivery will blow your mind. We're chuffed to have him joining us all the way from Bristol.

Miles Hadfield - Miles stole the show at Bluedot festival, so we're over the moon to have him back. He's headlined Bang Said the Gun, Evidently and other nights. Evidently said of him "Miles Hadfield is an absolute gem of a performer, a wickedly wonderful wordsmith with a dry wit and understated charm. Think Leonard Rossiter meets Morrisey only better."

All hosted by MC Rob Steventon.

In addition to the brilliant bill, we'll be hosting a huge charity raffle.
All (as mentioned) is in aid of Mustard Tree - a brilliant charity alleviating the plight of Manchester's homeless & impoverished.