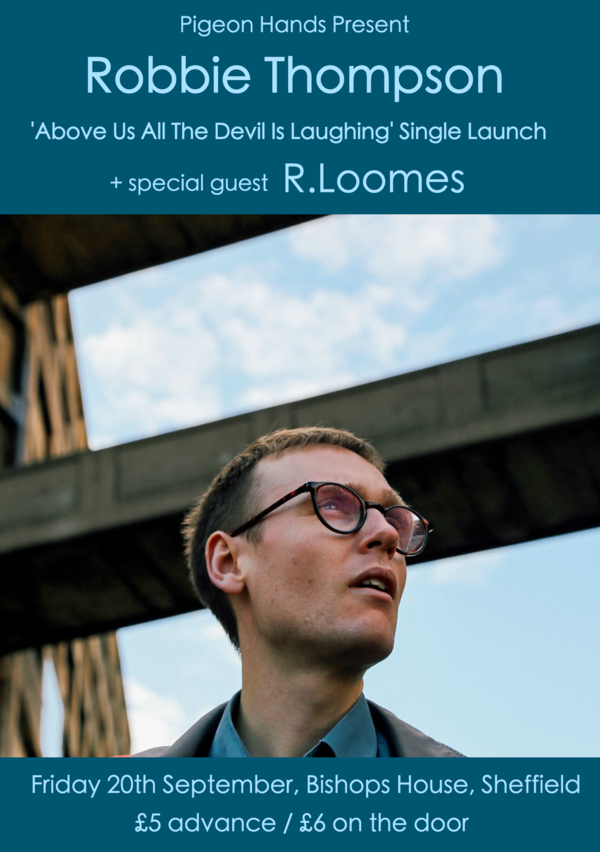 Pigeon Hands present 'Above Us All The Devil Is Laughing' Single Launch - Part 1: Sheffield.

We're celebrating Robbie's debut Pigeon Hands release by returning to Sheffield's favourite 500-year old Tudor house, at the tip of Meersbrook Park, and immersing ourselves in some of the most contemplative and understated songwriting and performance the city has to offer.

Reflective, lyric driven songwriting, inspired by the post-industrial North of England, and described by BBC Introducing as "utterly beautiful". Robbie typically makes up one fifth of much travelled collective The Buffalo Skinners, and this new single is his first solo release to feature a full band.

Speaking of the song, Robbie says:

"‘Above Us All the Devil Is Laughing’ contemplates the struggle to find meaning and purpose in life’s daily battles, whilst being hopelessly aware that we can’t possibly win the war. Death, absurdity, late capitalism, chance and time are coming for all of us.

But maybe winning the war was never the point; maybe the real purpose is to find meaning and connection in each battle, and that we might have more compassion for ourselves in all of it. Human beings are inherently flawed in so many ways, and thank god that is the case, otherwise we would have none of the compassion, warmth, or humour that gets us through."

Prolific dark-folk sorcerer from Nottingham whose releases go from strength to strength.

"Rachael Loomes’s songs are a reminder that music is born from silence, they embody life and death, winter and spring, opposites as complementaries and part of the same cycle. “I think I will always need contrast, in my music and in my life.” Rachael tells Sabat, “If I only had the light I know I would never get any work done, but at the same time, if I only had darkness I wouldn’t ever find the strength to do anything in the first place.”
- Sabat Magazine

Tickets £5 from Party For The People (£1.10 booking fee goes to charity)

FYI: The previous two Pigeon Hands shows at Bishops House sold out in advance, capacity is very limited and it is strongly advised that you buy a ticket before the night.

BYOR: There's no bar. Please bring your own refreshments.