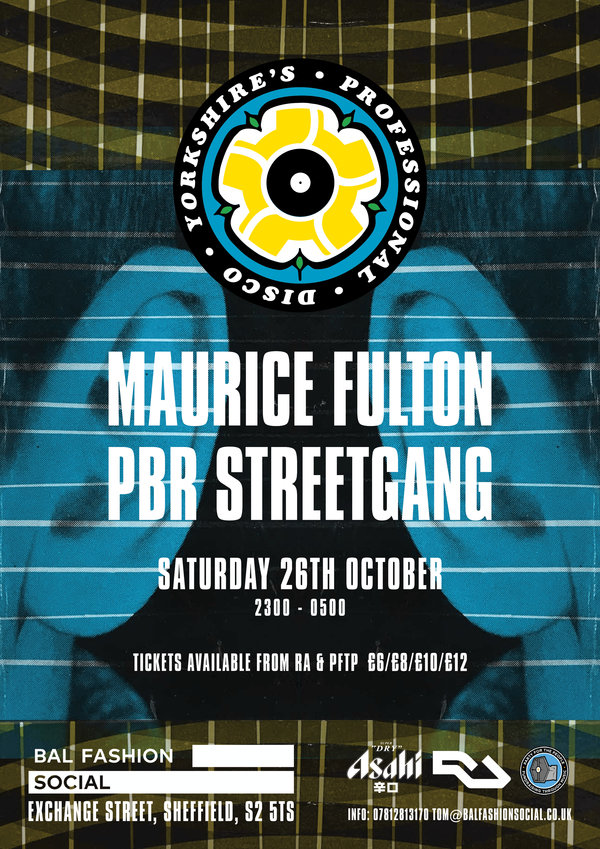 “The ethos of our disco is great music simple, and as veterans we are professional (or we’d like to think so), hence everything from the surrounds to the sounds has been ‘professionally curated’.”

PBR Streetgang hooked up with an old Leeds pal Bally Johal who had opened a bar/event space in Sheffield which became quickly known as a hub for alternative underground music.

Having been asked to play they re-kindled their friendships to quite literally to say the writing was on the wall (shutters); which read: ‘Yorkshire’s Professional Discount Jewellery Store’ - and so YPD ‘YORKSHIRES PROFESSIONAL DISCO’ was born.

The dashing duos career saw them become internationally renowned but having children and wanting to come back to home turf we bring you ‘Yorkshire’s Professional Disco’, combining experience, and gaining new music influence from the selectors of tomorrow with potential artists to include Bradley Zero, Donald Dust, Maurice Fulton, Ruff Dug...

Flyers and posters to be done by local artists and will encapsulate the professional nature of our outfit - but all importantly this professionalism will translate to the dance floor.

As the three make very clear ‘Upstairs for dancing!’

The who’s who of DJ’s - Maurice originally from Baltimore began his professional career aged thirteen on WEBB 1360 AM radio. From that moment he never looked back.
Now at the point where he regularly plays the U.S. and around the world - you'll often find him in the DJ booth at world-renowned clubs such as Bar Rhumba and 333, UK; Loop, Japan; Skansen, Oslo; Lux, Portugal; Nitsa, Barcelona and Berghain, Berlin. Often dazzling crowds and DJ’s alike with his energy and skills on three turntables - joining the dots between underground garage, disco, afro and anything in-between which always leaves the crowd screaming for more.

As a producer he’s always seems to be one step ahead of the curve. From the early years as one of the Basement Boys, utilising his skills on the keyboard and drum programming for the likes of Ultra Nate and Crystal waters - to working on such labels as Warp, SSR, Discfunction, Transfusion, Pagan UK, Imperial, Pink Music and Sahko Recordings.
It’s his most recent work alongside Sheffield based musician Roisin Murphy from Moloko fame which seems to have elevated his reputation as one the industries favourite producer!