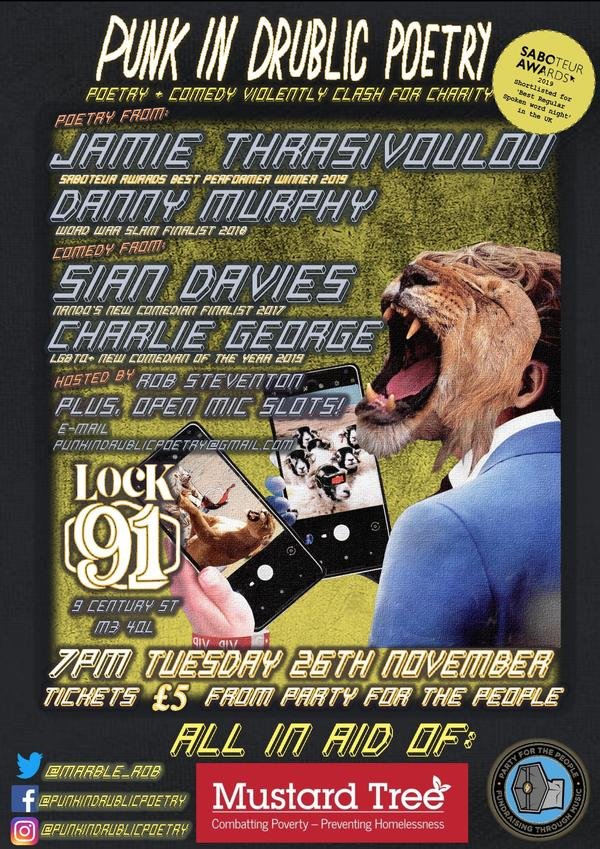 After October's roaring success, Punk in Drublic is chuffed to be returning to Lock 91 on Deansgate Locks.
November's line up features...
COMEDY FROM
SIAN DAVIES
Runner up in the Funny Women Stage Award 2019, Winner of Hilarity Bites New Act competition 2018, finalist in Manford's New Act competition 2019, Beat The Frog World Series 2018, Nando’s New Comedian 2017 and Harrogate Theatre Comedian of the Year 2017. Sian has more accolades than you can shake a stick at. In 2019, she established Best in Class - a touring showcase of working class Comedians. You're gonna love her.
CHARLIE GEORGE
Finalist of Leicester Square New Comedian, and Pride's got Talent 2018, and WINNER of the LGBTQ Comedian of the year 2019. Coming from a circus background into Stand-up Comedy, Charlie has won plaudits from on high for her hilarity. We're honoured to have her making the trip up from London.

POETRY FROM
JAMIE THRASIVOULOU
Saboteur Awards' Best Performer 2019, a part of UNISLAM 2019 winning team and The Official poet of Derby County FC. Jamie's debut collection The Best of a bad Situation came out on Silhouette Press in 2017, and he's since built up a reputation as one of the best performance poets in the Country.
DANNY MURPHY
Widely loved and lauded Mancunian poet. Danny was a finalist in the Word War V Poetry slam in 2018, and hosts Prestwich's Lovely Words at Rufus. Danny's been a long-time Punk in Drublic regular and we're utterly chuffed to have him on for a longer spot.

There is also an open-mic section. Apply for a slot at punkindrublicpoetry@gmail.com

In addition to the brilliant bill, we'll be hosting a huge charity raffle.
All, as ever, is in aid of Mustard Tree - a brilliant charity alleviating the plight of Manchester's homeless & impoverished.