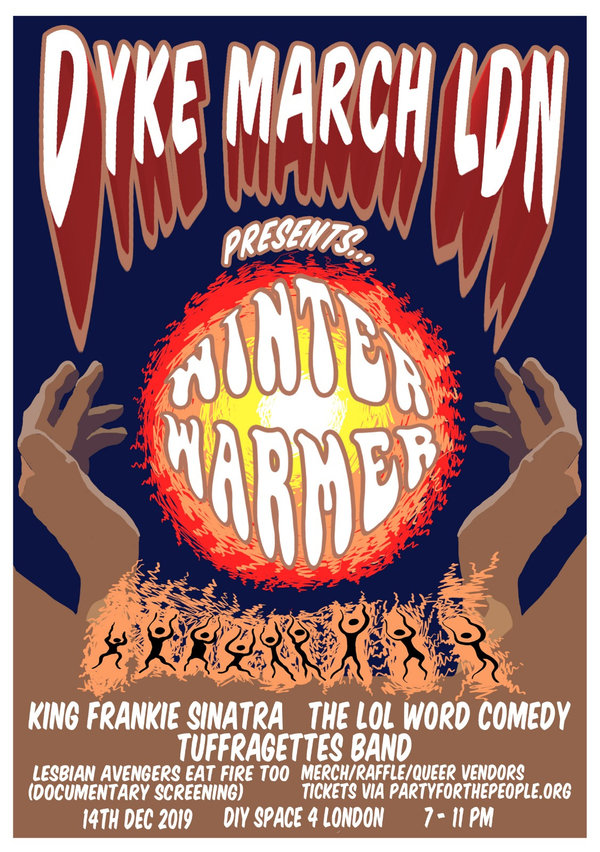 Come one, come all to DYKE MARCH LDN’s seasonal fundraising night! as we organise to facilitate a brand-new, radical community event next year, we need you to DIG DEEP in aid of our efforts.
Ring in the holiday season with...

THE LOL WORD COMEDY - ft. CHLOE PETTS, CHLOE GREEN
The LOL Word’s founding Chloes (Petts and Green) have pulled together a stellar line up of queer women and nb comedy babes just for the Winter Warmer - fresh from selling out the Soho Theatre!
(i/t @lolwordcomedy / fb The LOL Word)

LESBIAN AVENGERS EAT FIRE TOO (1993) - FILM SCREENING.
The 1993 documentary offers a rare insiders' look at the New York group's first year, from their initial groundbreaking demo in front of an elementary school in '92 to the incredible Dyke March in DC, where the Avengers ate fire in front of the White House, cheered on by an enormous crowd. A brilliant intro to what Dyke March is allllll about. (t @lesbianavengers / fb Lesbian Avenger Documentary Project)

And a BIG GAY RAFFLE with all kinds of goodies up for grabs!

your cash will help us fund, amongst other things:
// our accessibility provisions, to make organising and attending Dyke March - as well as our simultaneous stationary space - possible for as many people as we can
// payment for the artists, performers, and workshop facilitators who create our stationary community space on march-day
// payment for those facilitating our stewarding and de-escalation training sessions
// materials for our meetings
// donations for the maintenance of the spaces we organise in
// and much, much more!

DYKE MARCH LDN is a day-long protest and community gathering for lesbian, bisexual and queer women and non-binary folk, disrupting a street near you in summer 2020.

DIY Space for London is on a single floor level, with access ramps (including stage) widened doors, accessible gender-neutral toilet and plenty of space for manoeuvring and getting away from crowds. There is plenty of seating available.
See diyspaceforlondon.org/access for more information including travel routes.

PLEASE NOTE: NO ONE WILL BE TURNED AWAY FOR LACK OF FUNDS, BUT DIY SPACE HAS VERY LIMITED CAPACITY AND WE MAY WELL SELL-OUT IN ADVANCE. Please email us at DYKEMARCHLDN@GMAIL.COM to be added to our guest-list!