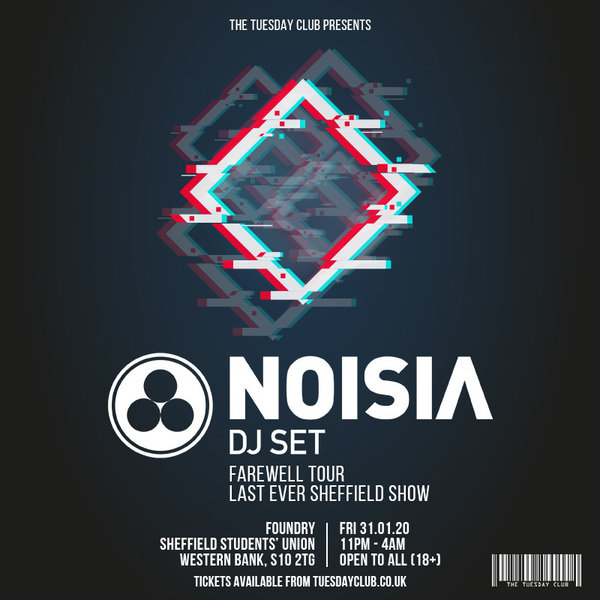 The Tuesday Club are honoured to announce that we will be hosting Noisia's last ever Sheffield show, as part of their farewell tour.

When the sad news was announced that Noisia would be coming to an end in 2020, it sent shockwaves through the dance music community. Nik Roos, Martijn van Sonderen and Thijs de Vlieger released a statement saying that Noisia was 'a game that [they've] completed.' 'Noisia has always been about making as few compromises as we can,' the trio said. 'When Noisia becomes a compromise in itself, it's time to move on.'

One of the most recognisable acts in Drum & Bass and beyond, they have an artillery of iconic tracks such as 'Machine Gun', 'The Bells', 'Diplodocus', 'Dead Limit', 'Anomaly' and countless others. They have worked with some of the biggest names in the world including Skrillex, The Prodigy, Deadmau5, and Foreign Beggars - who recently hosted their own final show at The Tuesday Club.

Since breaking through in 2003 Nik, Martijn and Thijs have consistently questioned and pushed musical and technical boundaries. Their diverse range of accomplishments are just as likely to be found within gaming, movies and theatre as they are on the dancefloor. Through their popular Noisia Radio show, Noisia Invites events and labels – Vision, Division – they unswervingly championed and amplified new talent… Ensuring their unique presence and influence wasn't just felt across the broadest possible electronic music landscape, but also encouraging the next generation to approach the craft with a similar sense of detail, fun and ambition as their own.

We can't wait to see what comes next for these 3, but for the time being, join us at what is sure to be one for the history books...

- ID scanning is a condition of entry for all club nights at Foundry. If you are unable to provide valid ID or a U-Card you will not be allowed entry, regardless of your age.

- If you’re drinking, be responsible and know your limits.

- Make sure you get home safe and with friends.

- If you’re worried about a friend, or if you see anybody who may need help, please let a member of staff know straight away.

- Keep an eye on your drinks and don’t leave them unattended.

- Sheffield Students' Union has a zero-tolerance policy toward drug use at its licensed venues. Searches will be in operation, as well as sniffer dogs for some events.

- Students found in possession of illegal substances will be banned for a minimum of 6 weeks and can face a lifetime ban. Students will also be required to attend a session with a Drugs Worker at START, Sidney Street before being allowed back into the licensed venues, even if their 6-week ban has expired. Students will also be excluded from holding office in committee and Officer roles for that year. In extreme cases, students can be arrested and expelled from University.

- Non-Students found in possession of illegal substances will receive a lifetime ban from all licensed premises at Sheffield Students' Union.

- If you decline a search upon arrival, you will not be allowed in the venue.

- Taking drugs bought from unknown sources can lead to life-threatening illnesses. Be aware of the current risks: www.talktofrank.com

- Free water & earplugs are available from behind the bar.

- Strobe lighting will be in use at the event.

- For more info head to: www.tuesday-club.co.uk/safety