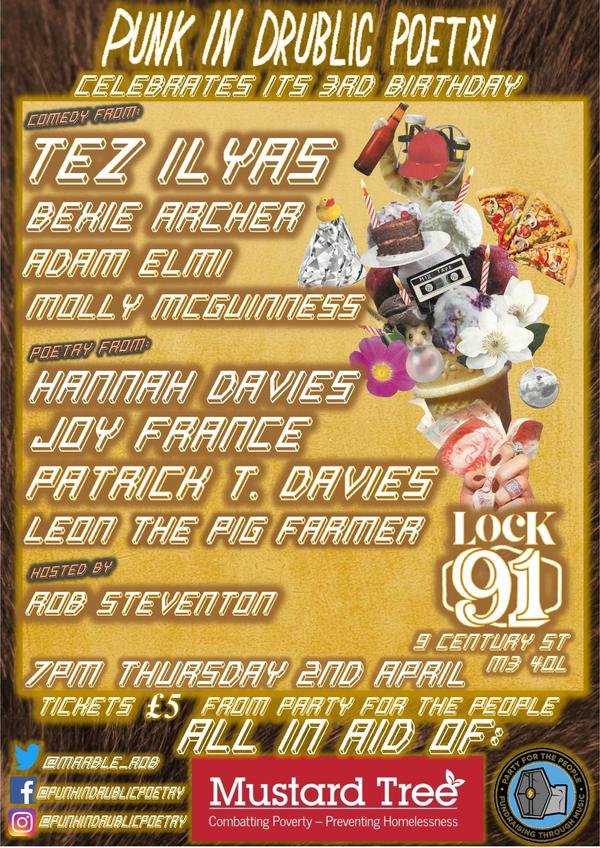 Celebrating three years of Comedy and poetry violently clashing in aid of Mustard Tree, Punk in Drublic is going all out to throw the party of the year at Lock 91.
The line up features:
COMEDY FROM
Tez Ilyas
Tez's comedy shows 'Teztify' and 'Made in Britain' have won huge critical acclaim, and he currently hosts Channel 4's 'The Tez o' Clock show' and stars in BBC's Man Like Mobeen. We're utterly honoured to have Tez as our Comedy Headliner
Bexie Archer
Winner of the Chortle Student Comedy Award 2018
Molly McGuinness
Hillarious wit, who became PIDP's Comedy Compere in 2020
Adam Elmi
Hilarious up and coming Comedian who made his PIDP debut in February
POETRY FROM
Hannah Davies
Hannah is an associate artist at York's spoken word shindig SAY OWT, a multi-slam champion (Including Manchester's Word War).
Having her make her Punk in Drublic debut is the best poetry birthday present we could possibly ask for.
Joy France
Another multi-slam winning Mancunian Poetry legend. Joy has many strings to her bow, and recently became a rap battler. Check her out on BBC News here:https://youtu.be/9geXxcYqFcI
Patrick T. Davies
Rapidly rising star of the UK Spoken word scene. Patrick is a PIDP veteran, and previous headliner who appeared at Bluedot and Shambala festivals last year, went on tour supporting The Blinders, and has an amazing new E.P- The Agenda Bender.
Leon the Pig Farmer
Another rapidly rising star of the UK Scene. Leon's words are pertinent and powerful.
All, as ever is in aid of Mustard Tree Homelessness charity.
There will be a massive charity raffle to bolster our fundraising efforts.