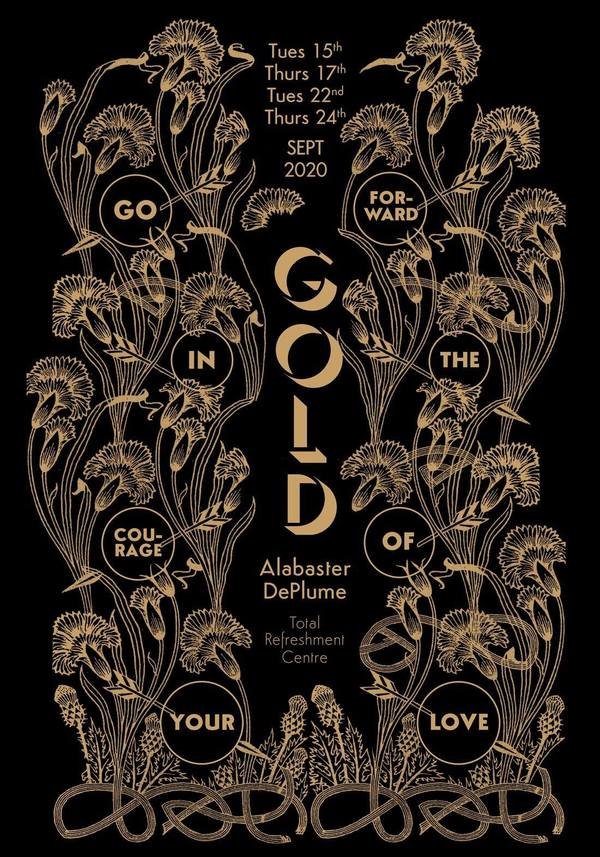 While I record my next album, we will share live music and creative experiences in the room next door. You are invited to both.

2 rooms you are welcome in:
– One where I'm recording my album.
– One with guest hosts performing things (details below)

6–11pm generally, though you will probably catch more of my music if you arrive early

Please buy a ticket, so that we know when you are coming – to help us accommodate a limited audience, for safety and the feeling of safety. We aim to keep numbers below 30 at any one time.

***** TO CATCH THE LIVE ALABASTER DEPLUME RECORDING SESSION EACH NIGHT, ARRIVE BEFORE 8pm *****

TUES 15th SEPTEMBER – SILHOUETTES PROJECT TAKEOVER
TRC crew running a hip hop performance event with young people, who empower and challenge each other, live. They are simply going to do their thing while we record. I am hopeful that we will mix up our groups a bit (that’s why I’ve invited them) – but I do not demand or expect it.
Set up by Root 73 http://www.rootseventythree.com/team.html
IN ALABASTER'S BAND FOR HIS RECORDING TONIGHT (arrive before 8pm): Rozi Plain (guitar); Kwake Bass (kit/synth); Sarathy Korwar (kit); Falle Nioke (voice)

A key character in the spectacular band The Turbans, he’ll be bringing together musicians to improvise, I’ve heard there may be a strong Turkish contingent, and that this would be very good for everyone involved.
https://www.theturbans.co.uk
IN ALABASTER'S BAND FOR HIS RECORDING TONIGHT (arrive before 8pm): Rozi Plain (gtr); Hannah Miller (cello); members of Deep Throat Coir; Tom Herbert (dbl bass); Matt Webb (dbl bass); Falle Nioke (voice); Donna Thompson (voice)

Nuha Ruby Ra is an astonishing fierce vulnerable punk performance and visual artist. She is assembling a band to do live development of material in Alabaster's style, and will be joined by him in the show. DJs TBA
Snapped Ankles – https://www.snappedankles.com
Nuha – https://www.instagram.com/nuha__ruby__ra__/
IN ALABASTER'S BAND FOR HIS RECORDING TONIGHT (arrive before 8pm): Sarathy Korwar (kit); Hannah Miller (cello/voice); Conrad Singh (gtr); Donna Thompson (voice)

I think I will take care of this one, and host it and perform the main thing. Donna Thompson will perform a set with musicians. I will invite Falle, also. Maybe others. But I think I’ll do a set myself, and speak to the crowd about what we’re doing maybe. DJs TBA
IN ALABASTER'S BAND FOR HIS RECORDING TONIGHT (arrive before 8pm): Ursula Russell (kit); Conrad Singh (gtr); Rozi Plain (gtr)