Punk in Drublic XI at Lock 91 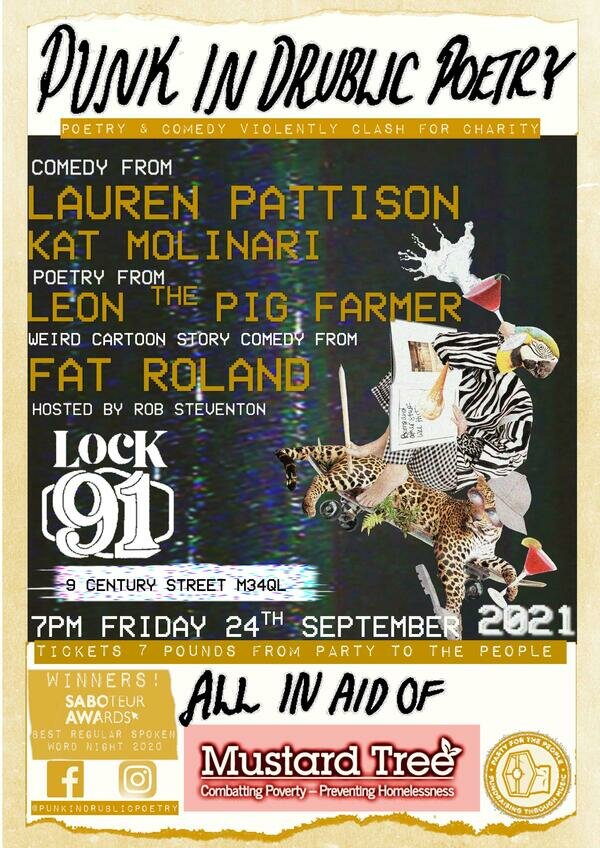 WE'RE BACK after a heck of a difficult year, with a killer line up of Comedy & Poetry in aid of Mustard Tree Homelessness charity.

COMEDY FROM
LAUREN PATTISON
With a list of accolades and plaudits as long as your arm, we're stuck for where to start with Lauren. Her stand up earned her a nomination for the Edinburgh Fringe best Newcomer in 2017, she's a champion of Comedy Central's Roast Battle, and her TV credits include Comedy Central at the Comedy Store Takeshi’s Castle, The Dog Ate My Homework (CBBC), The Great Christmas Rant (ITV2), The Blame Game (BBC One Northern Ireland) and internationally on New Zealand’s 7 Days (TV3), Australia’s Comedy Up Late (ABC) and Canada’s The Stand Up Show with Katherine Ryan (The Comedy Network Canada).
You. Are. So. Funny -Katherine Ryan,
KAT MOLINARI
A Finalist in the UK Pun championships in 2019, and regular performer at Punk in Drublic. We're chuffed as ever to have Kat back. Her Uniquely hillarious takes on Religion and Sexuality never get old.

POETRY FROM
LEON THE PIG FARMER
A rapidly ascending star of the Poetry scene, whose Storytelling of PTSD and life-post-armed forces are as gripping as they are insightful.
In the past year he's bagged support slots with Tim Burgess (The Charlatans), Peter Hook, The Goa Express and more
AND WEIRD CARTOON STORY COMEDY FROM
FAT ROLAND
Aside from running events for The Anthony Burgess foundation and being the host of 2 time Saboteur award winning Bad Language , Fat's idiosyncratic picturebook/poetry/comedy/storytelling/genrebending shows are utterly brilliant. His performances have won him The Literary Death Match title and his most recent show '7 Inch' was commisioned by the Lowry Theatre.

All is in aid of Mustard Tree Homelessness charity- a wonderful cause.

Our last Lock 91 gig sold out, so we advise booking up quickly.

There will also be a charity raffle, along with yet TBC guest performers.

For other enquiries email punkindrublicpoetry@gmail.com